Ghar Wapsi For Chandrababu? After Bitter Feud Over AP Division, TDP Now In Alliance Talks With Congress In Telangana 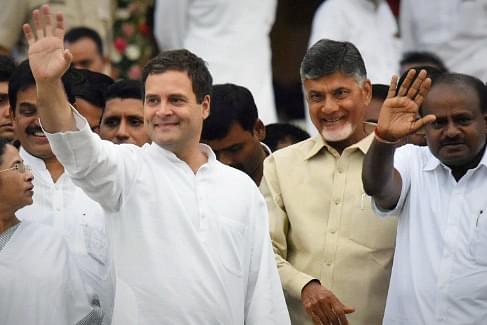 The Telugu Desam Party (TDP) and Congress are engaged in high-level talks for a possible alliance in Telangana, a state over whose formation the two had fought bitterly less than seven years ago, Times of India has reported.

Senior Congress functionaries in Telangana, Koppula Raju and Madhu Goud Yashki have reportedly been hand-picked by party president Rahul Gandhi to engage TDP chief Chandrababu Naidu for an alliance between the parties in Telangana.

Despite the state division, the TDP still enjoys several pockets of influence in Telangana while Congress is the primary opposition in the state. Telangana Chief Minister (CM) K Chandrashekar Rao today announced the dissolution of the state’s assembly paving the way for early elections in the state.

“An electoral understanding has been reached between Rahul Gandhi and Chandrababu Naidu in Telangana that they will unitedly take on TRS. However, the issue of seat-sharing is yet to be finalised,” a source quoted in the report says.

Raju is a former IAS officer while Yashki is considered to be a close aide of the Congress president Rahul Gandhi.

“Through good offices of Raju and Madhu, both Rahul and Naidu are convinced an electoral understanding between Congress annd TDP will be mutually beneficial,” says the report quoting sources.