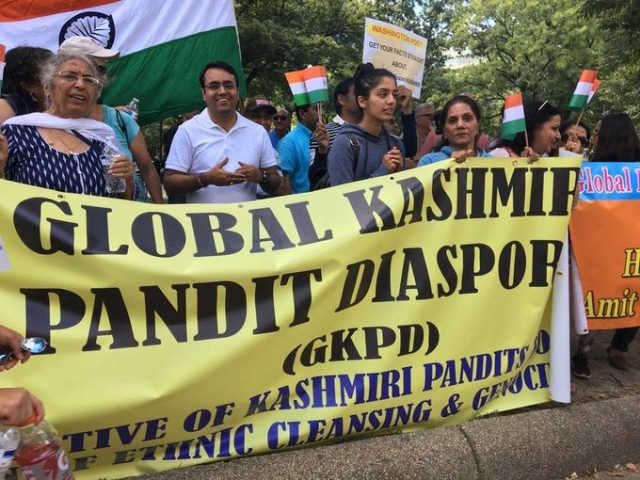 Supporting the Indian government's decision to revoke Article 370 and 35A from the erstwhile state of Jammu and Kashmir, the Global Kashmiri Pandit Diaspora (GKPD) has requested Prime Minister Narendra Modi to set up a representative Advisory Council of Kashmiri Pandits under the aegis of Home Minister Amit Shah for full restorative justice for the community.

The group, including Vikas Marhata, Sarla Pandita, Usha Fotedar, and Usha Bakshi, also handed over a memorandum to the Prime Minister and requested him to consider its "one-pointed" demand that the government of India should set up a representative Advisory Council of Kashmiri Pandits, a statement issued by GKPD said.

"In our Memorandum we have requested honourable Prime Minister to consider our one-pointed demand. The government of India needs to set up a representative Advisory Council of Kashmiri Pandits who can work under the aegis of Minister of Home Affairs Amit Shah ji," said the statement quoting Bakshi.

"Their charter will be to jointly come up with a plan for full restorative justice for the Kashmiri Pandits as Internally Displaced Persons with a clear pathway towards us being able to go back to a homeland in the Valley when the time is right. We seek our way of life with safety and dignity without fear of refoulement. Kindly grant our prayer," the memorandum said.

"On behalf of the 700,000 dispersed Kashmiri Pandits we deeply appreciate your granting an audience to us, said the memorandum, adding we want to express our heartiest support for your historic decision to remove Article 370 and Article 35 A whose pernicious impact has destroyed Kashmir's society, culture, civilisation, economic progress and the ability to lead a peaceful and full life," it said.

"Our members have mobilised in India and across the capitals of the major countries in the world in support of your bold decision which has liberated Kashmir and Kashmiris."

According to the association, "through articles, meetings with elected representatives, including holding hearings, media interviews, demonstrations, conferences, plays, think tanks we have countered the Pakistani misinformation campaign and their proxies in the Valley. We will stand with you unequivocally and resolutely until Kashmir is fully resurrected."

The memorandum praised Modi, saying "your leadership has taken India to new heights and we will follow you into a bright future".

Expressing the hope that the GKPD could become value-added partners with Indian government and the newly constituted Union Territories to bring job creating, new economy investments for the benefit of all, the memorandum said the group would rebuild the historic civilization of Kashmir, which once was a peaceful center of learning and inclusivity.

"Our representatives in Kashmir, who are also yours, work in close contact with us and jointly we will bring hope. Today, we sit in front of you no different than when our ancestors sat in front of Guru Tegh Bahadur. We, the indigenous people of Kashmir, are facing imminent extinction. After 30 years of apathy and neglect we see hope in you. We trust you."