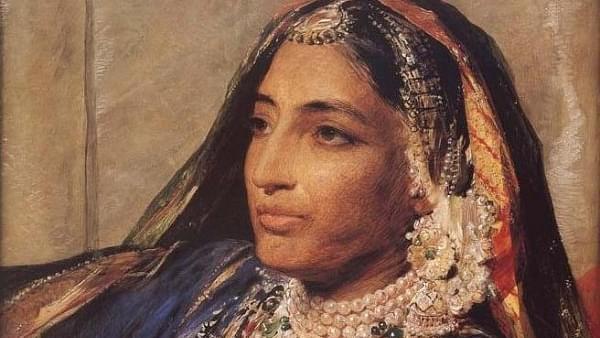 Necklace in the portrait of Maharani Jindal Kaur (George Richmond/Wikipedia)

The emerald and seed-pearl necklace owned by Maharani Jindan Kaur, the wife of Sikh emperor Maharaja Ranjit Singh was sold for 187,000 pounds in London, New Indian Express has reported . Jindan Kaur ruled as a regent to her son Duleep Singh after the Maharaja’s death. The necklace was sold a the auction house Bonhams.

A gold-thread-embroidered, velvet-clad leather quiver for ceremonial purposes made for the Lion of Punjab Maharaja Ranjit Singh was part of the auction. It was sold for 100,000 pounds. An emerald seal made by Mughals for Marian Hastings, the second wife of India’s first Governor-General fetched 181,250 pounds.

An album of 120 photographs of Punjab in the last quarter of the 19th century made by Lockwood Kipling, father of Rudyard Kipling was sold for 125,000 pounds. The Samsara Collection of Indian painting, comprising 44 miniatures of the styles of Pahari and Rajasthani in 17th to 19th century were sold for 553,750 pounds.