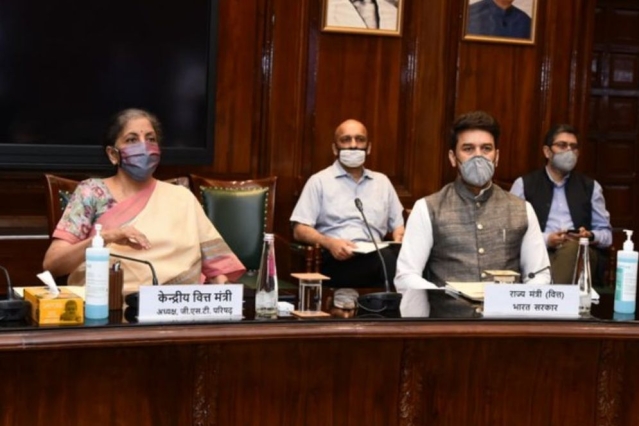 Even with consensus eluding a decision on the new formula to pay GST compensation to states, the 42nd meeting of the GST Council on Monday (5 October) decided to extend the period of compensation cess beyond the five year transition period slated till June 2022 to meet the revenue gap.

Originally, the cess was to be levied till June 2022 to compensate the states for the revenue gap that emerged from the transition to the Goods and Services Tax (GST) regime in 2017. The extension would mean that cess would be collected for few more years to pay compensation dues of states arising between April 2020 and June 2022.

The decision, though beneficial for the states, comes as a setback for businesses which will have to pay the cess to compensate the states.

Among other major decisions, Finance Minister Nirmala Sitharaman said that the Centre will release compensation of Rs 20,000 crore (the amount collected from cess so far this fiscal) to states towards loss of revenue during 2020-21 by Monday night and an amount of about Rs 25,000 crore towards IGST of 2017-18 by next week.

As a further step towards reducing the compliance burden, particularly on the small taxpayers having aggregate annual turnover of Rs 5 crore, the Council's earlier recommendation of allowing filing of returns on a quarterly basis with monthly payments by such taxpayers will be implemented with effect from 1 January 2021.

Such quarterly taxpayers would, for the first two months of the quarter, have an option to pay 35 per cent of the net cash tax liability of the last quarter using an auto generated challan, said an official statement.

Further, to encourage domestic launching of satellites particularly by young start-ups, the satellite launch services supplied by ISRO, Antrix Corporation Ltd and NSIL would be exempted from 18 per cent levy.

The GST Council also discussed the lowering of the GST on alcohol-based sanitisers from 18 per cent, but no decision was taken on the matter, Sitharaman said.

The Council will meet again on 12 October to discuss on the matter of compensation cess.

With 10 opposition-ruled states and Union Territories against any move to bring in a new GST compensation formula that would burden them with additional borrowing, the Council decided to meet again to get more inputs from states on the design of GST compensation so that things could get moving.

About 21 states, mainly from the ruling party, have given their approval for the first option suggested by the Centre to settle GST compensation in Covid times.

Sitharaman said that the Council meeting on Monday reminded her that no one can take anybody for granted and indicated her preference for more talks.

The Centre has also agreed to rework the option 1 of GST compensation formula by taking 7 per cent annual growth of revenue instead of 10 per cent decided earlier. This would take up the loss of revenue due to GST implementation up from Rs 97,000 crore under option 1 to Rs 1,10,000 crore.