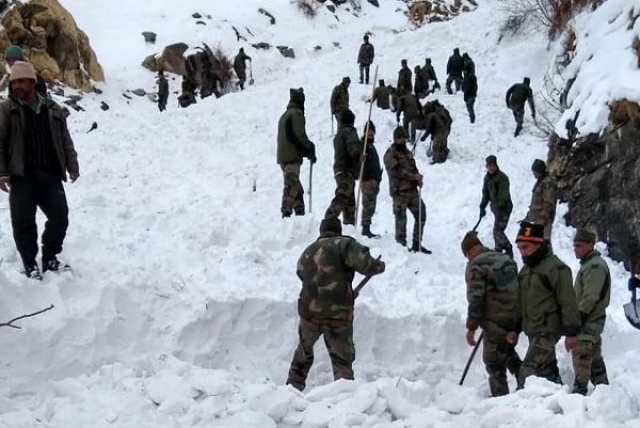 In a tragic incident on Wednesday (20 February), one soldier of the Indian Army was killed and several others were trapped in snow after an avalanche hit the group in Kinnaur district of Himachal Pradesh. The search operation for those buried under the snow is going on with more than 250 soldiers of Army and paramilitary forces engaged in the task, reports NDTV.

According to the report, the soldiers were hit by a sliding glacier at the Namgya region of Kinnaur district at around 11 am on Wednesday (20 February). They were part of an Army patrol deployed in the Shipki La Sector along the border of India and China.

Sixteen soldiers were reportedly patrolling the border area in two separate teams. As the avalanche hit them, several soldiers got trapped in the snow. While many of them were rescued, one Jawan died on the way to the hospital.

Five soldiers are still trapped in the snow, search operations for them resumed on Thursday (21 February) as the temperatures touched a freezing minus 15 degrees celsius.

Along with the Army, the Indo-Tibetan Border Police (ITBP) and Border Roads Organisation (BRO) is also involved in the rescue operation. According to ITBP, four inches of fresh snow has accumulated on the slopes.

The BRO is using machines to try and track down the trapped soldiers. The report cited an army spokesperson as saying that the search operation would continue till the last man was retrieved.