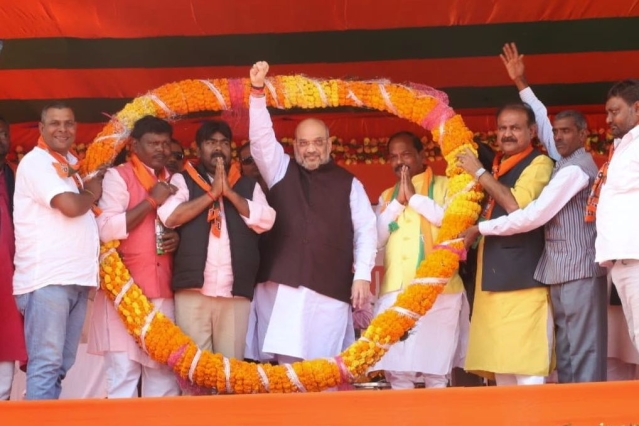 Union Home Minister Amit Shah on Thursday (21 November) accused the Congress of blocking the construction of Ram temple by stalling the case while praising Prime Minister Narendra Modi for solving all the problems pending in the country “one by one”, reports Times of India.

The Home Minister raised the issue during his election rallies in Jharkhand, where polling for the first phase of the state Assembly elections is scheduled for 30 November.

“Congress was repeatedly not allowing the case to be heard. Now, the Supreme Court has delivered a historic verdict, paving the way for a grand temple on Ramjanmabhoomi touching the sky. Modiji is solving all the problems pending in the country one by one,” Shah was quoted in the report as saying.

Shah also spoke about the Modi government’s historic decision to revoke the special status given to Jammu and Kashmir by nullifying the Articles 370 and 35A.

“Congress allowed the Kashmir problem to continue for 70 years for its vote bank. The Modi government has wiped the blot off the crown of the country by abrogating these Articles,” he said.

The elections for the Legislative Assembly are due to be held in Jharkhand from 30 November to 20 December in five phases. Results of the polls will be declared on 23 December.