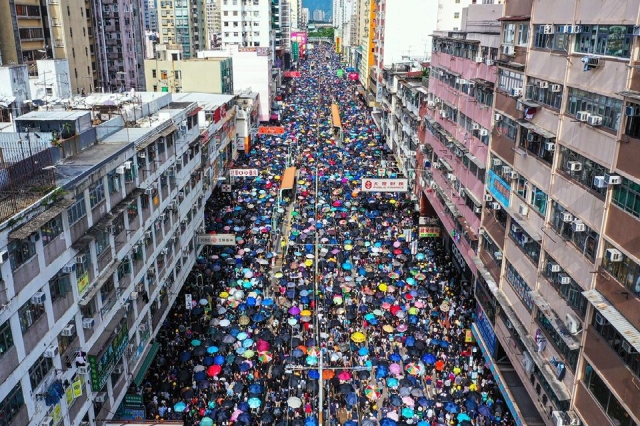 Hong Kong's Mass Transit Railway (MTR) Corporation has suspended all cross-border services to mainland China after footage emerged of a train en-route to Guangzhou being attacked by more than 20 black-clad assailants, it was reported on Tuesday (8 October).

According to the footage, at about 11pm on 4 October the train taking passengers to Guangzhou was surrounded when it reached the station, the South China Morning Post reported.

The video showed attackers using hammers and steel bars to smash the glass windows of the train and the surveillance cameras on the station platform.

The mob was shown throwing large stones, a bicycle, and other objects into the platform gap when the train was pulling away from the station.

Reacting to the violence, the MTR Corporation on Monday suspended the through-train services to several mainland Chinese destinations, including Guangzhou, Beijing, and Shanghai.

An MTR spokeswoman said 20 glass panels were vandalised and a train compartment was defaced.

The cross-border service has become the latest casualty in the sustained campaign of vandalism by hard-core elements of the anti-government movement against the city's rail operator.

On Monday, the MTR Corp closed 54 of its 94 stations, with all services shut down at 6 pm following an unprecedented closure of its entire network on 5 October out of safety concerns for passengers and staff.