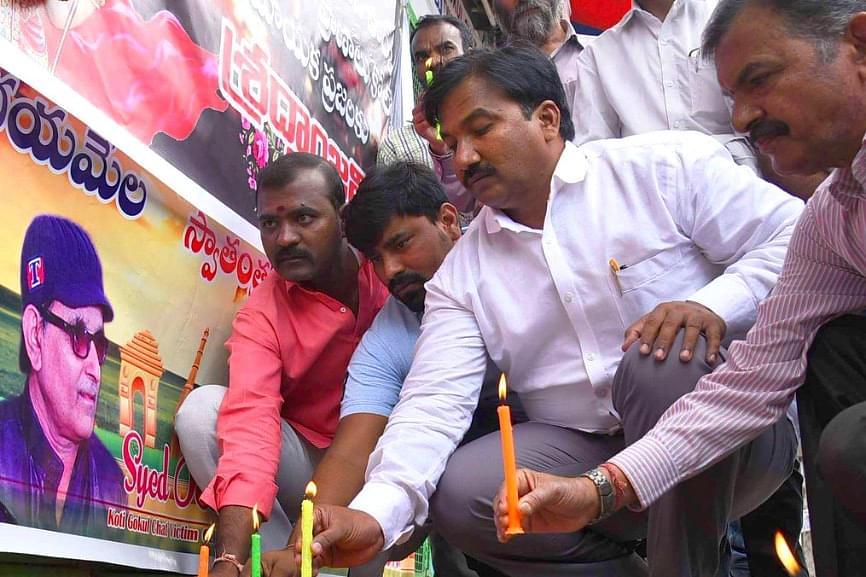 People pay tributes to the victims of the blasts in Hyderabad. (pic via Twitter)

The verdict in the Hyderabad twin blasts case of 2007 was pronounced today (4 September) at a special court hall set up at the Cherlapally central prison, where five of the eight accused are lodged.

Investigations had revealed the involvement of seven persons, all alleged operatives of the Indian Mujahideen(IM), in the planning and execution of the two bomb blasts at Gokul Chat and Lumbini park. Of these, two - the Bhatkal brothers - are absconding. The remaining five accused - Akbar Ismail Choudhary, Aneeq Shafeeq Sayeed, Mohammed Taariq Anjum Ahsan, Farookh Sharfuddin Tarkash and Sadiq Israr Ahmed Sheikh - were arrested by the Counter Intelligence wing of the Telangana Police.

As reported by The Times of India, the court has convicted Aneeq Shafique Sayeed and Mohammed Akbar Ismail Chowdhari while acquitting Farooq Sharfuddin Tarqash and MD Sadiq Israr Shaik, citing lack of evidence.

The verdict on the fifth accused Tariq Anjum against whom the Counter Intelligence Cell, the investigating agency, had filed a separate charge-sheet and the quantum of sentence for the convicts will be pronounced on Monday. Anjum was charged for providing shelter for the IM operatives post the blasts.

Having waited for the judgement day for over a decade, victims are said to have welcomed the judgement but seek a strong sentence. Family members of a victim Sadasiva Reddy who suffered speech impairment apart from severe injuries on his hands and legs demanded capital punishment, as reported by the daily.