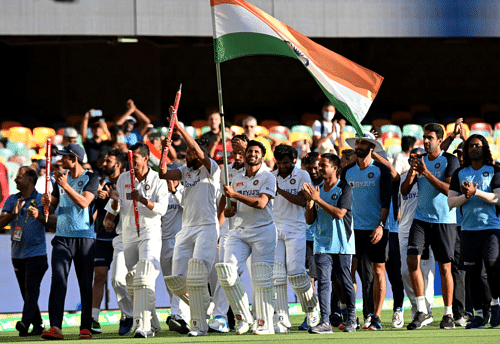 The Indian cricket team chased down 328 runs on the final day of the fourth test match of the Border-Gavaskar trophy to secure a 2-1 series victory. Flamboyant batsman Rishabh Pant played a fantastic unbeaten knock of 89 runs to see off the fourth innings. Shubman Gill (91) and Cheteshwar Pujara (56) laid a solid foundation earlier on in the day. The game seemed well-poised to be heading towards a draw but the Ajinkya Rahane-led side significantly upped the ante in the last two sessions.

Ajinkya Rahane: Our boys showed a lot of character and determination after the Adelaide Test

Ajinkya Rahane took over the reins from Virat Kohli at a very tricky juncture. The Indian team had succumbed to a humiliating loss at Adelaide, getting bowled over for their lowest-ever total in test cricket. However, Rahane led from the front in Melbourne through a gritty century. His captaincy thereafter was impeccable, ensuring that the the Indian side completes an unprecedented consecutive test series victories in Australia.

“It means a lot to us. I don't know how to describe this, but our boys showed a lot of character and determination after the Adelaide Test. I'm really proud of each individual,” Rahane said in the post-match presentation. He further claimed, “ Siraj played two Tests, Saini just one, so it was inexperienced but the character shown by the bowlers and everyone else was incredible. We didn't discuss anything about Adelaide. Just played wanted to play the remaining games with good attitude and character without worrying about the result.”

Ravi Shastri: The players know when they cross the boundary line, they are playing for India

Head coach Ravi Shastri had faced a lot of flak after the Indian team bundled out for 36 in the second innings of the first test at Adelaide. However, stand-in skipper Rahane and the coaching staff brilliantly turned things around for the team amidst the flurry of injury concerns. Shastri was all praise for the players after the win, and even credited Virat Kohli for driving the vision of this team.

“This team wasn't built over night. Virat has been with us despite not being here. His intensity rubbed on to everyone else. Rahane might look calm but he is a strong man from inside. A tough character. We play Pant abroad because he is a match winner. When he doesn't keep well, people criticize him. But he can help you win matches like these,” Shastri was quoted by Cricbuzz.

He added, “To come here and play the way we have despite having our main bowlers injured, is phenomenal. The players know when they cross the boundary line, they are playing for India.”