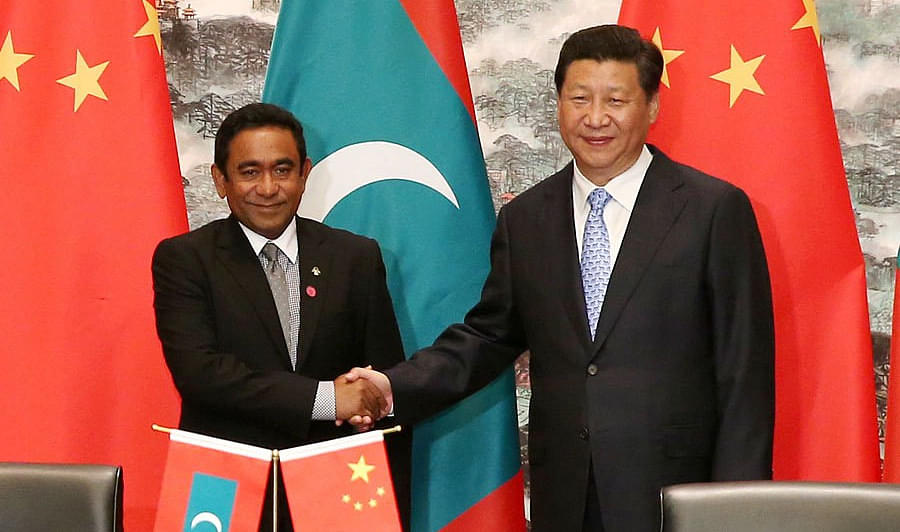 In its latest hostile move towards India, the Abdulla Yameen government in the Maldives has sent ‘special envoys’ to ‘friendly’ countries - China, Pakistan and Saudi Arabia to brief them on the unfolding crisis in the country, ignoring New Delhi, the New Indian Express has reported.

On Wednesday, two days after he declared an emergency and arrested the Chief Justice of the country for not towing his line, Yameen has dispatched the Minister of Economic Development to China, Minister of Foreign Affairs to Pakistan and the Minister of Fisheries and Agriculture to Saudi Arabia.

At least one among Yameen’s ‘friends’, China, has said that it is against any external intervention in the Maldives. China’s statement comes when India is reportedly considering a range of tools, including military intervention, to restore order and democracy in the archipelago nation.

While the Maldives has been experiencing political turbulence since the ouster of the first democratically elected President Mohamed Nasheed in 2012, the country descended into chaos after the Supreme Court ordered the release of high-profile political prisoners in the country. The country’s Supreme Court had also reinstated 12 members of the parliament, giving the opposition a majority. This did not go down well with Yameen, and he declared an emergency in the country and accused the judges of plotting to overthrow him. Since coming to power in 2013, he has arrested a number of prominent leaders in the country on trumped up charges.

The opposition, including Nasheed - who lives in exile in London - has called on India to “send an envoy backed by the military” to restore order in the island nation.

“We would like the Indian government to send an envoy, backed by its military, to free the judges and the political detainees, including former president Maumoon Abdul Gayoom, from their detention and to bring them to their homes. We are asking for a physical presence,” Nasheed said in his tweet on 7 February.

Also Read: Crisis In The Maldives: Is It Time For India To Intervene?