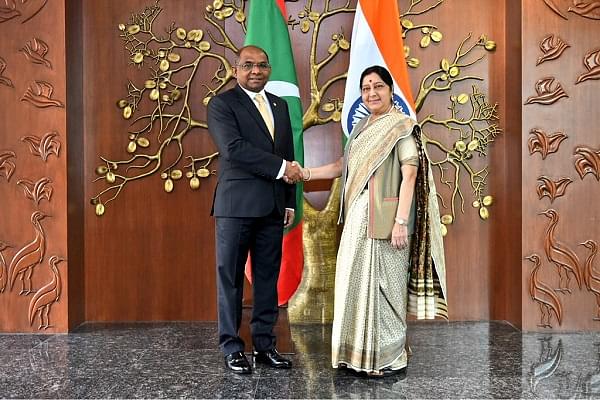 India is looking to provide up to $1 billion in low-interest loans to the Maldives, which is highly indebted to China, as per reports. As part of the deal, India will seek to sway the Maldives away from Chinese influence by forging closer Indo-Maldives security ties, including the permanent deployment of Indian military personnel in the country, reported the Nikkei Asian Review.

The details of the plan are to be finalised prior to the visit of Maldivian President Ibrahim Mohamed Solih in December. The negotiations between the countries are going well, with the Maldivian Foreign Minister Abdulla Shahid and Indian External Affairs Minister Sushma Swaraj agreeing to ensure cooperation on economic and security issues, at a meeting on Monday (26 November) in New Delhi.

The Ministry of External Affairs (MEA) said in a statement that India supported the Maldives in ‘ensuring fiscal and budgetary stability’.

As per former Maldives president Mohammed Nasheed, who is close to Solih, the Maldives owes almost $3 billion to China, adding that it would be impossible for his country’s government to repay these loans from its own revenues.

The debt was accumulated under former president Abdulla Yameen’s administration, being incurred for various infrastructure projects in the country. Yameen was seen trying to build closer ties with China and had also signed a Free Trade Agreement (FTA) between the two countries.

The Solih government reportedly wants to move away from this pro-China legacy and establish closer ties with India. It is considering abandoning the FTA and under the new administration, the Maldives will likely be roped in for the vision for a ‘Free and Open Indo-Pacific’ that India is advancing along with Japan, US and Australia – to counter China’s growing influence.