‘India Is One Of The World’s Best Assets Today Due To Its Vaccine Capacity’: UN Chief Guterres 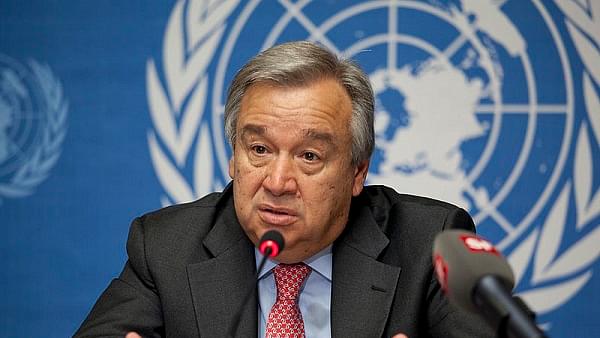 India is one of the world's best assets in the fight against Covid-19 because of its ability to supply the vaccines needed to fight the pandemic and the UN counts on it, according to Secretary-General Antonio Guterres.

"I think that the production capacity of India is one of the best assets the world has today, and I hope the world understands that it must be fully used," he said on Thursday at his news conference.

"I would like to say how much we count on India. I mean, India has one of the most advanced pharmaceutical industries."

On Monday, India's Permanent Representative T.S. Tirumurti told the Security Council that his nation's vaccine-making capacity would be for "the benefit of the entire humanity".

Guterres described the development of India as a pharmaceutical powerhouse as "a very important element of democratisation of access to medicines all over the world".

The UN chief said that the world body was in contact with Indian institutions regarding the vaccines produced by the country.

"India played a very important role in the production of generics for use that was outside (the country)," he added.

Guterres reiterated his appeal "for licenses to be made available in order for companies around the world to be able to produce some of the vaccines that already exist".

India and South Africa asked the World Trade Organization last year for a waiver from patents and other intellectual property rights for materials needed to fight the pandemic "until widespread vaccination is in place globally, and the majority of the world's population has developed immunity".

The Secretary-General noted that most of the vaccine distribution had been in the developed countries and denounced "vaccine nationalism" as "an economic as well as a moral failure".

"While every country has the right and the duty to protect its own people, no country can afford to neglect the rest of the world," he said.

Western industrialised nations have all banned the export of Covid-19 vaccines, and as in the case of the UK and the European Union squabbling among themselves.

Only India, along with China and Russia, allow the export of vaccines.

Speaking at Monday's Security Council meeting on the implementation of its resolution on backing Guterres efforts to fight the pandemic, Tirumurti said that India had already donated more than six million doses of the vaccine to nine countries and was in the process of sending contracted supplies to other countries.

It will also gradually supply to the World Health Organization's COVAX programme to provide the vaccine to the poor nations, he said.

"As the largest vaccine-producing country of the world, we are fulfilling our commitment to make vaccine production and delivery capacity available for the benefit of the entire humanity."