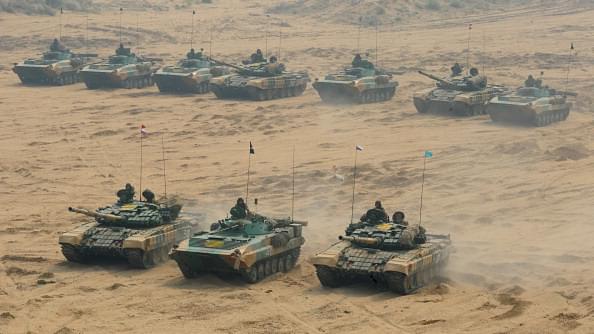 Amid a hostile situation on its borders with China and Pakistan, India on Saturday (29 August) decided not to take part in a multilateral strategic command post exercise in Russia next month in which its two neighbours were also participating.

An Indian military contingent was to take part in "Kavkaz 2020" ("Caucasus 2020"), exercise next month where various countries, including China and Pakistan, were participants.

The Indian government on Saturday decided it would not take part in the exercise. It stated, "...in view of the pandemic and consequent difficulties in the exercise, including arrangements of logistics, India has decided not to send a contingent this year to Kavkaz-2020. The same has been informed to the Russian side."

The government reiterated that Russia and India are close and privileged strategic partners.

The exercise in Astrakhan region of south Russia between September 15 and 26 would witness the participation of over 12,500 troops, including from Russia.

China is sending an army contingent, and also a naval deployment of three ships to the exercise.

The aim and scope of the exercise is improving cooperation. The idea is for militaries to prepare for joint action with units of armies of foreign states.

Contingents from Abkhazia, and South Osetia, which are partially recognised as states by Russia and a few other nations, will also be present.

The exercise comes amid an over three month long standoff between India and China at the Line of Actual Control in eastern Ladakh. Despite several levels of dialogue, there has not been any breakthrough and the deadlock continues.

There have been several clashes between troops of both sides and the most brutal took place on June 15 in Galwan Valley where India lost 20 of its men while there was an undisclosed number of casualties on the Chinese side.