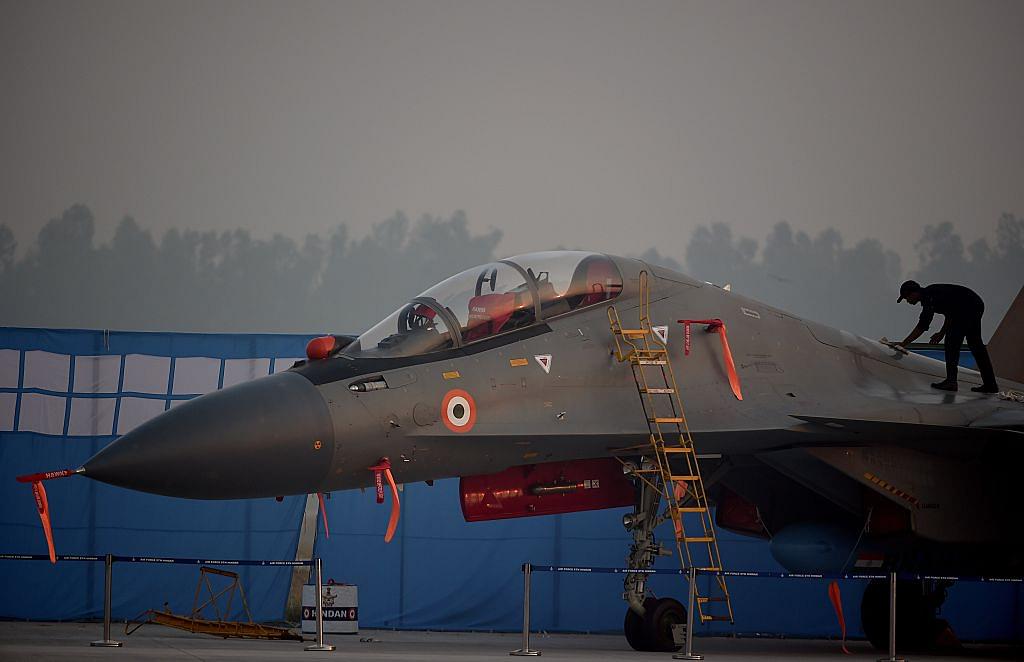 Sukhoi Su-30MKI at the Hindon Air Force Base ( Photo By: MONEY SHARMA/AFP/Getty Images)

In a fresh attempt to beef up its presence in the Northeast, the Indian Air Force (IAF) on Thursday landed a Sukhoi Su-30MKI at a civilian airport in Agartala. The aircraft- said to be on a routine training mission- departed soon after it landed.

“This is a part of routine peace-time training activity, nothing else,” the Defence Ministry spokesman Group Captain Amit Mahajan was quoted as saying.

Sukhoi Su-30MKI has long been regarded as an important tool to counter Chinese aggression. Apart from deploying Su-30MKI squadrons to the region, the air force has also operationalised various Advanced Landing Grounds (ALGs). These ALGs, mostly located along the border with China, will allow the Indian Air Force to strike deeper inside enemy territory in case of a conflict. Modifications to the aircraft were also approved to make it capable of carrying supersonic BrahMos-A cruise missiles.

Experts believe that the mission could have been a part of IAF’s attempt to operationalise more air force bases in the Northeast to balance China’s aggressive posturing across the border. In view of China’s rapid infrastructure development along the border with India, a larger effort has been made by the government and the armed forces to boost military presence and capability in the region.

The mountainous state of Arunachal Pradesh shares a 1,030-kilometre unfenced border with China and various Chinese incursions have been reported in the recent past. To upgrade Army’s capability, the government also approved the deployment of a land-based BrahMos regiment to Arunachal Pradesh. Following this move, an article in the People’s Liberation Army’s official mouthpiece warned India of “counter measures” from China.

“India deploying supersonic missiles on the border has exceeded its own needs for self-defence and poses a serious threat to China’s Tibet and Yunnan provinces,” the mouthpiece read.