Indian Army Goes Israel Way, Ties A Stone-Pelter In Front Of Its Cavalcade As Punishment 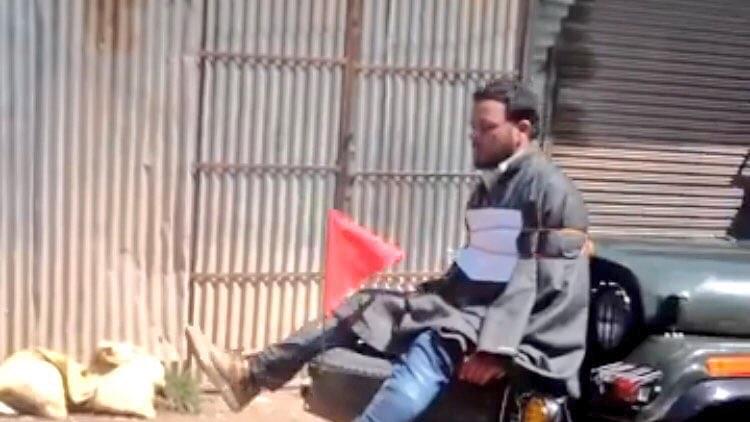 A stone pelter in the Kashmir valley tied to a vehicle.

Pictures and videos, allegedly showing a stone-peter tied in front of a jeep belonging to Indian armed forces, were shared by former Chief Minister of Kashmir Omar Abdullah on Twitter earlier today (14 April).

This young man was TIED to the front of an army jeep to make sure no stones were thrown at the jeep? This is just so shocking!!!! #Kashmir pic.twitter.com/bqs4YJOpJc

Here's the video as well. A warning can be heard saying stone pelters will meet this fate. This requires an urgent inquiry & follow up NOW!! pic.twitter.com/qj1rnCVazn

Ever since the Pakistan-sponsored and separatist staged ‘protests’ broke out in the valley in 2016, convoys of the Indian army and paramilitary forces have found it difficult to commute without being hit by stones. Stone-pelting mobs, that gather on the directions of separatists , hit the vehicles with stones and petrol bombs.

To deal with the stone-pelting mobs, the army may have employed a tactic that the Israeli Defence Forces (IDF) have been using for decades. The IDF, which faces a similar situation in the West Bank and other areas inhabited by Palestinians, also ties stone-pelters to its vehicles to discourage mobs from throwing stones.

However, Swarajya was unable to verify the authenticity of these pictures.

This comes just days after a video featuring a CRPF personnel showing immense restraint even when he is attacked by a stone-pelting mob at a polling booth in Srinagar went viral. The video shows the Jawan walking when suddenly a civilian attacks the soldier. The Jammu and Kashmir Police on Friday registered an FIR against the youth seen in the video.