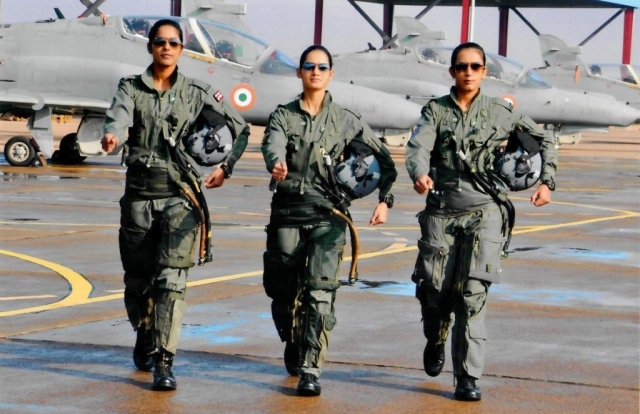 The first batch of India’s women fighter pilots. (via Twitter)

After being inducted as the first batch of women fighter pilots into the Indian Air Force (IAF) the trio of Avani Chaturvedi, Bhawana Kanth and Mohana Singh are all set to take to the skies in IAF’s MIG-21”Bison” supersonic aircraft, reported the Times Of India.

These first women fighter pilots were commissioned as flying officers in the fighter stream after completing basic training in June 2016 - breaking the tradition of only male fighter pilots.

Having completed solo sorties in Pilatus PC-7 turboprops, Kiran and Hawk jet trainers, the pilots will now undergo training to fly the IAF’s highly-demanding Bisons. The fighter has a takeoff and landing speed of 340 kmph, virtually the highest in the world.

The pilots will have to undergo a gruelling training schedule, taking upwards of a year, before they’re declared “fully-ops”(operational) by the airforce. It takes close to Rs 15 crore for the IAF to train a single fighter pilot.

The MIG-21s are more complex than the newer Sukhoi-30MKIs and Mirage-2000s and are meant for air defence missions over the Indian territory, and the women pilots will be posted to air-defence missions in the event of war.

As the first batch of women pilots is on their way to get fully-ops on the MIG-21s, another batch of two women pilots is already in the basic training phase on the Hawk advanced jet trainers.