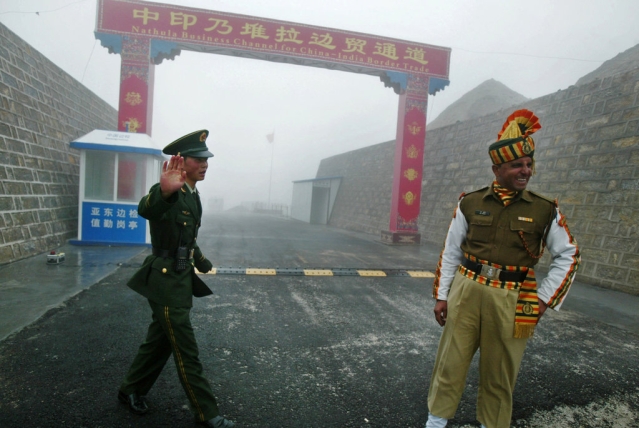 Indian and Chinese soldiers at a border crossing. (Diptendu Dutta/GettyImage)

In the backdrop of a tense military standoff between India and China on the Doklam Plateau in the Sikkim sector, New Delhi responded with a one-point rebuttal after Beijing released a 15-page fact sheet accusing its neighbour of “inventing various excuses” to justify what the Chinese calls “illegal” crossing into its territory.

New Delhi's response: “India considers that peace and tranquillity in the India-China border areas is an important prerequisite for smooth development of our bilateral relations with China”.

The Indian Foreign Ministry said New Delhi had previously expressed its position on the issue, that "China had intruded into Bhutanese territory, which was aimed at changing the status quo along the India-Bhutan-China tri-junction that India and China had agreed to settle taking into account Bhutanese concerns as well, according to a 2012 agreement".

In a related development, India rubbished China’s claims that there was a significant reduction of Indian troops in Doklam area, where armed forces of the two sides are locked in a face-off over the past two months. The Chinese Foreign Ministry on Wednesday claimed that there are approximately 40 Indian soldiers facing off against the Chinese army in Doklam, down from 400 that had been in the area at one point.

The Indian government, however, emphasised that information provided by China is incorrect and that 350 to 400 soldiers still remain deployed in the area from either side.