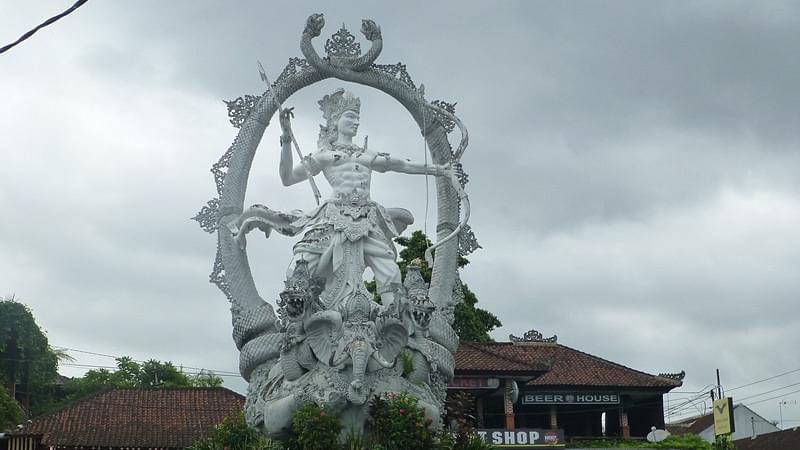 Statue of a Hindu god in Bali, Indonesia.

Bali, a Hindu majority resort island in Indonesia, has refused to cover half-naked statues located in different parts of the island during a visit by King Salman bin Abdulaziz Al Saud of Saudi Arabia. While the statues in the Indonesian capital and adjoining regions were covered as a mark of respect to the King of the Wahhabi kingdom, those in Bali were not.

“We’re just going to leave (the statues) as they are, we don’t have to cover up anything because it is our culture,” Dewa Mahendra, spokesman of the local government, was quoted by AFP as saying. They “are cultural creations, they are art,” he said.

The island of Bali, which attracts lakhs of visitors throughout the year, has a large number of statues of Hindu gods. Many of these statues are bare-chested and depict Hindu goddesses in traditional Balinese style. The island has managed to preserve its Hindu roots despite rising extremism in the country.

King Salman is on a three-week visit to South-East Asian countries and is expected to be in Indonesia till 9 March. In a bid to create stronger economic ties in the region, the King will also visit Brunei, Japan, China and the Maldives over the next few weeks.

His tour has been in news because of the 460 metric tonnes of luggage he is carrying and the 1,500-strong entourage that is traveling with him to attend to his needs. The king had initially planed to enjoy his vacation in Bali from 4 to 9 March, but his stay has now been extended.

While this decision has been welcomed through out the world, some hardline Islamists in Indonesia have criticised it. In the past, many countries, including European ones, have covered statues as a mark of respect for leaders of Islamic countries. During a visit by Iranian President Hassan Rouhani to Italy in January last year, nude sculptures in a museum were covered.