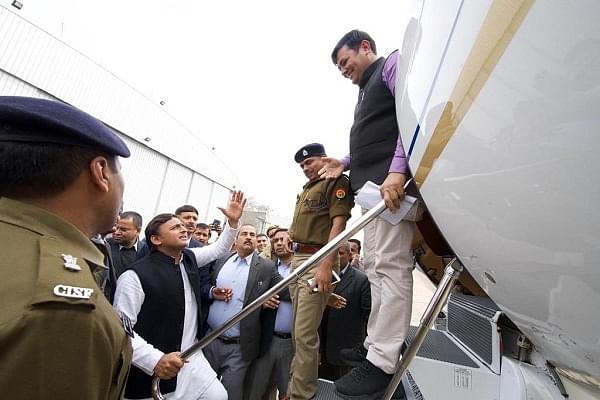 Samajwadi Party supremo and former chief minister of Uttar Pradesh Akhilesh Yadav was stopped from boarding a flight to Prayagraj from Lucknow at the airport today (12 February 2019), upsetting his plan to attend the oath-taking ceremony of new office bearers of the Allahabad University Students’ Union, reports News18.

Yadav took to Twitter to slam the BJP-led government of the state for stopping his journey. “I was prevented from boarding the airplane without any written orders. Currently detained at Lucknow Airport. It is clear how frightened the govt is by oath ceremony of a student leader. The BJP knows that youth of the country will not tolerate this injustice anymore,” he wrote.

On the other hand, Uttar Pradesh Chief Minister Yogi Adityanath revealed that Yadav had been stopped on the request of the Allahabad University administration who did not want political leaders coming to the varsity.

“The Samajwadi Party should stop being a disturbing element. There is Kumbh going on in Prayagraj and even Yadav himself went there 10 days ago and took a dip at Sangam and had darshan. It was the Allahabad University administration which asked the government to stop Yadav from coming to Prayagraj as it was suspected that his visit may have sparked violence on the campus between students groups. That is why he has been stopped from going to Prayagraj,” Adityanath stated.

Following the incident, SP lawmakers launched protests in both the houses of the state assembly. SP MLC Udayveer Yadav stated that the district administration had been apprised of the visit well in advance but that no prior notice had been communicated regarding cancellation.

Bahujan Samaj Party (BSP) head Mayawati, whose party is now in an alliance with SP, also criticised the BJP government over the incident, attributing dictatorship and anarchy to it.