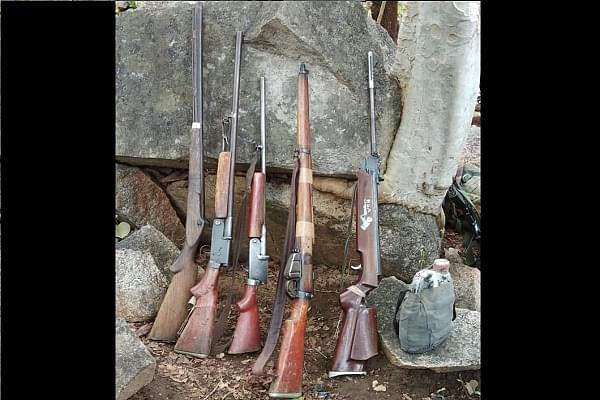 The guns seized in the operation. (@ITBP_official/Twitter)

Troops belonging to the 27th Battallion of the Indo-Tibetan Border Police (ITBP) conducted an operation and destroyed a Naxal camp in Chhattisgarh’s Rajnandgaon district, reports The New Indian Express. A brief firefight occurred between the insurgents and the security forces but the former fled soon after.

The operation took place near the border with Maharashtra in the jungles of Kohkatoli.

"It is a major success for us as we could demolish a Naxalite camp before they could have settled and carried out any attack. During the encounter, there has been no report of any injury to our security forces," said ITBP official Vivek Pandey.

The number of escaped Maoists is believed to be around 20-26. A number of weapons were seized from the site by the troops including a 303 rifle, two 12 bore rifles and an air gun.

ITBP officials believe that a local Naxal leader Sukh Lal was commanding the terrorists at the camp at the time of the operation.