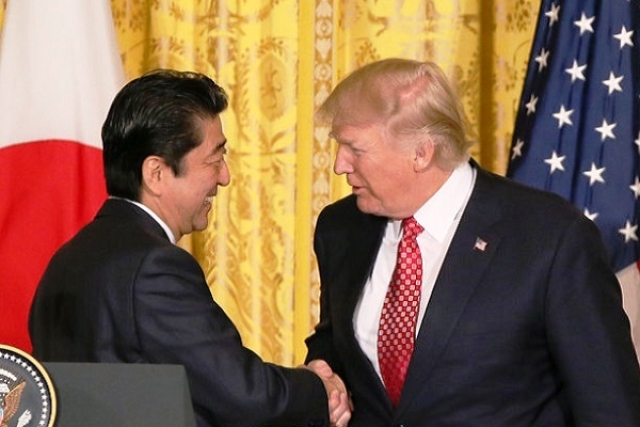 Japanese Prime Minister Shinzo Abe has refused to deny that he nominated US President Donald Trump for the Nobel Peace Prize for his efforts in helping ease tensions with North Korea, CNN reported.

Abe showered praise on Trump for his efforts to defuse the North Korean nuclear crisis.

“I’m not saying (the claim) is untrue,” The Japan Times quoted Abe as saying during a speech he delivered in the Lower House of Parliament.

Abe added that the US President had been working to curb North Korea's nuclear and missile development, and that he "highly" appreciated his leadership.

Abe also acknowledged that Trump was actively collaborating to resolve the issue of decades old kidnappings of Japanese citizens by the Pyongyang regime, which is one of the main priorities of Abe’s government.

"I will continue to (offer) my utmost cooperation to President Trump to solve the North Korean nuclear and missile issues and the abduction issue, which is the most important ... for Japan," said Abe.

"With that in mind, as for the Nobel Peace Prize, the Nobel Committee has decided not to disclose nominators and nominees for 50 years. I would like to refrain from commenting on it, based on that fact".

Abe’s remarks followed Trump’s claim on 15 February that the Japanese leader had nominated him for the Nobel Peace Prize for his work toward easing tensions with North Korea last year.

Trump said that Abe had made the nomination and had given him a copy of the five-page letter he had sent to the Nobel nominating committee in Oslo.

"Prime Minister Abe of Japan gave me the most beautiful copy of a letter that he sent to the people who give out a thing called the Nobel Prize,' Trump said.

"He said I have nominated you, respectfully, on behalf of Japan. I am asking them to give you the Nobel Peace Prize," added Trump.

On Sunday (17 February), a Japanese daily reported that Abe had nominated Trump for the prize after the US government had through informal channels to Japanese leader suggested a possible Nobel Peace Prize nomination.

According to Nobel rules, “neither the names of nominators nor of nominees for the Nobel Peace Prize may be divulged until 50 years have elapsed”.