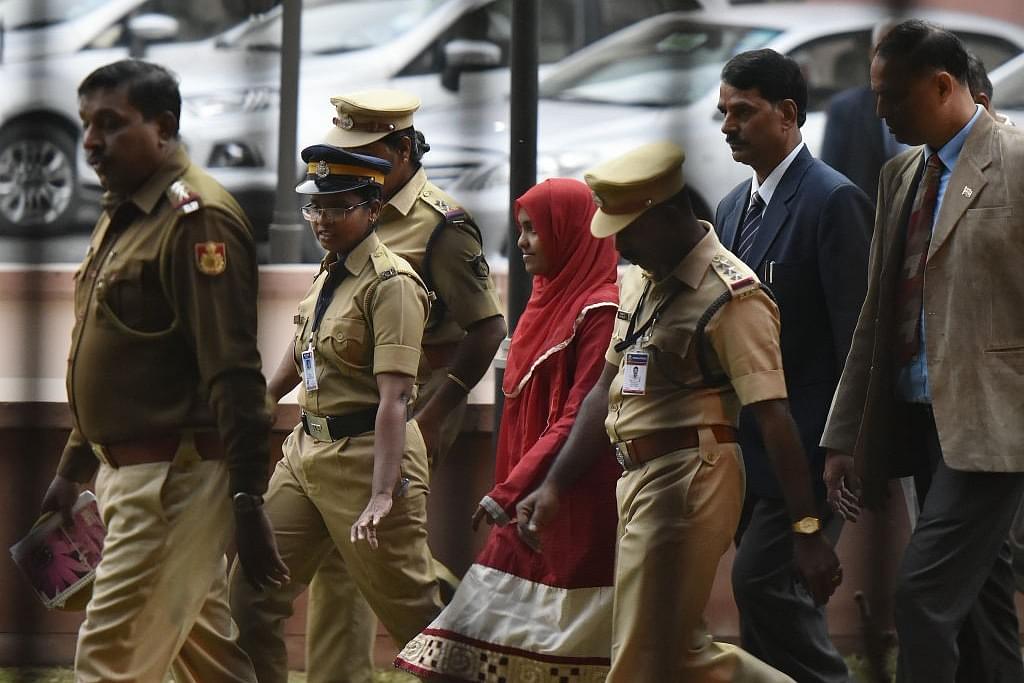 The 24-year-old Hadiya alias Akhila (in red dress) at the Supreme Court after hearing in New Delhi. (Vipin Kumar/Hindustan Times via Getty Images)

Radical Islamist outfit Popular Front of India (PFI) has spent close to Rs 1 crore as prosecution fees for lawyers and other bills on the Hadiya case in Supreme Court (SC), Pioneer has reported.

According to PFI, it has spent Rs 99,52,324 on the case, as it handled the bills pertaining to the case on behalf of Shaffin Jahan, the Muslim youth whom Akhila had married after converting to Islam.

Of the total amount, Rs 93,85,000 was paid to four senior lawyers, Kapil Sibal, Dushyant Dave, Indira Jaising and Marzook Bafaki who fought the case on Shaffin’s behalf in the apex court. Sibal had appeared in the SC seven times while Jaising and Dave appeared four and three times respectively while fighting the case.

Shaffin had appealed to the SC against a 24 May, 2017 Kerala High Court order that had annulled the marriage. Akhila, who had changed her name to Hadiya after her conversion to Islam had been entrusted to her father’s custody post the High Court order. Akhila’s father KM Asokan is a former Indian Army soldier.

However, the SC had on 8 March overruled the High Court order, and Asokan has vowed to continue the legal fight.

PFI had held a funding drive across Kerala in October last year to accumulate funds for the case. It had received Rs 81,61,245 through the drive and has paid the remaining, almost Rs 20 lakh, amount through its own funds to fight the case in the SC.

“We have been saying from the very beginning of this controversy that Shaffin Jahan is an activist of the PFI. They have admitted this effectively now,” claimed a Sangh Parivar functionary as PFI released the details of the money spent on the case.

Also Read: Sibal has made it a habit of invariably opposing the Hindu party in all important cases that are being argued before the Supreme Court.