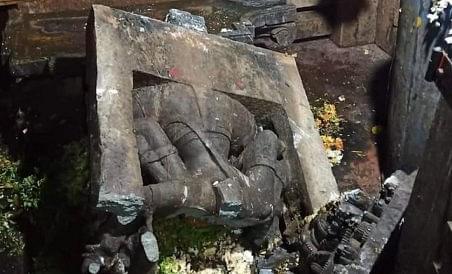 An idol of Dakshina Kali or Bhadrakali at Hassan's Doddagaddavalli Chatushkuta Temple, which dates back to 1113 CE was found to be broken yesterday (20 November), prompting an investigation by the police authorities, reports Deccan Herald.

The temple, an Archaeological Survey of India (ASI) monument, was built in the 12th Century by Hoysala dynasty.

An archaeologist and Indology researcher, Manoj G has rued that the Archaeological Survey of India (ASI) could have done better by installing steel doors to the temple. He explained that the aforementioned temple holds a special place in the culture and archaeological history of the State. He stated that the temple was not well protected.

Manoj also shared that the temple was built was a trader named Malishetty and his wife who had visited Maharashtra's Kolhapur and dreamed of building a 'Dakshina Kolhapura'.

While the investigations on the charge of foul play have been initiated, Hassan's Superintendent of Police (SP) R Srinivasa Gowda said that the temple had no guard, and its door was not locked when the incident took place, He added, "As of now, we cannot comment on who destroyed the idol."