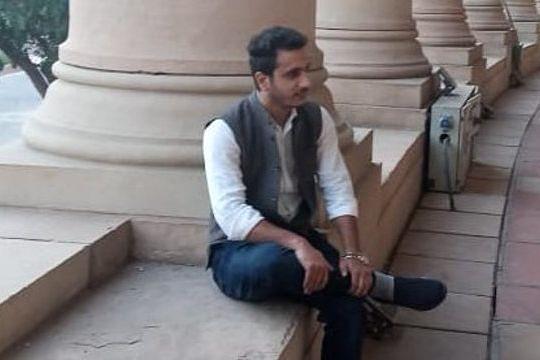 Aquib Mir, a Kashmiri social worker who describes himself as a nationalist and a thinker, released a video-message on 19 December on Twitter amidst the violent anti-CAA protests, requesting the protesters to refrain from becoming ‘road terrorists’.

In the video, Mir says:

“Today, I want ask the media of the whole country. In 2001, Amarnath Yatra and Yatris were attacked. Ninety innocent Hindus died but no one in the whole country picked up a stone, not even a small pebble, for stone-pelting.”

“When a terror-attack was carried out against Raghunath temple in Jammu, ten innocent Hindus lost their lives. Nobody, in the whole country, engaged in stone-pelting.”

“Doda, Udhampur, Kishtwar - many innocent Hindus were killed - but no one in the while country picked up even a single stone.”

“Not just this, in Uttar Pradesh, many Hindu temples were attacked by terrorists. Many suffered damages. Thousands of Kashmiri Hindus were forced to flee. Their houses were burnt down, their mothers-daughters were raped, thousands of Hindu temples were destroyed. But, no stone pelting occurred anywhere.”

“When Akshardham temple was attacked in Gujarat, the state was shut down. No one picked up a stone.”

“But today, when a bill has been passed to support the minorities in Pakistan, Afghanistan, Bangladesh, who are persecuted on the basis of their religion, whose mothers and sisters are raped in the name of the religion, who are converted forcibly, the opposition has joined hands with the extremist organisations are disturbing the peace of the nation.”

“I request the prime minister Narendra Modi and home minister Amit Shah to take strict action against these people as they are a significant threat to security of the nation.”

In another video, Mir explained that the CAA had no links to Indian Muslim.

“Please don’t make mosque (masjids) political. It’s only for prayer. Congress and other parties are using you only for politics. Every Indian Muslim is safe and no link with CAA,” he tweeted.

He also provided an Urdu translation for those who are unable to read English or Hindi.