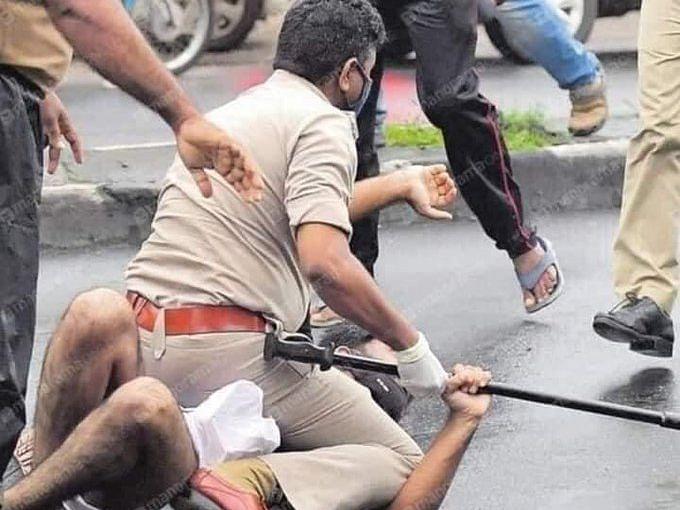 Social media has been abuzz with activity ever since picture of a police official squatting over a young Congress worker pinning him to the ground to allow Kerala Higher Education Minister K T Jaleel's convoy to pass through, surfaced.

It was Sunday evening, when the picture became public. The social media users immediately equated it with the unfortunate incident of George Floyd, a black American, who was killed in Minneapolis, United States (US), when Derek Chauvin, a white policeman, knelt on 46-year-old's neck for several minutes leading to his death eventually.

Floyd was handcuffed as he was pinned face down, calling for his mother and repeatedly saying "please" and "I can't breathe".

State Congress vice-president and two time former legislator P C Vishnunadh said it was indeed shameful for the Kerala Police, for what happened.

"Just see the cruelty that was shown to one of our young activist Antony, who turned into victim of police high-handedness, as literally a replay of what happened in the US was played out," said Vishnunadh .

One Twitter user wrote, "No this is not UP Police. But Kerala Police. PR Vijayan is misusing the state police to silence the Congress workers. We shall not."

No this is not UP Police.
But Kerala Police.

PR Vijayan is misusing the state police to silence the Congress workers.

One user called out the 'hypocrisy' by Communist Kerala government and wrote, "Before it happened in USA CPIM was http://crying.Today it happened in Kerala and is there a banana in your mouth @SitaramYechury This is how CPIM and Kerala Police treat the protests...Pitty on you"

Before it happened in USA CPIM was https://t.co/ZolrElVZ2c it happened in Kerala and is there a banana in your mouth @SitaramYechury .This is how CPIM and Kerala Police treat the protests...Pitty on you pic.twitter.com/ociuBjuYVo

Antony and Youth Congress workers took to the streets on Sunday evening and protested against Jaleel demanding his resignation after he was questioned by the Enforcement Directorate.

While some protesters were chased away by the police manning the roads, Antony fell down and when he was trying to get up, a police official saw to it, he was pinned to the ground, till Jaleel's convoy passed.

After that Antony's colleagues came rushing seeing the incident and he was rescued.

Young Congress legislator V T Balram also took to his Facebook page and posted the picture with the caption, 'Citizen and Pinarayi government'.