Kerala: Tension Prevails As Cops Foil Attempts By Jacobites To Storm And Occupy Malankara Churches ‘Taken Over’ By Orthodox Faction 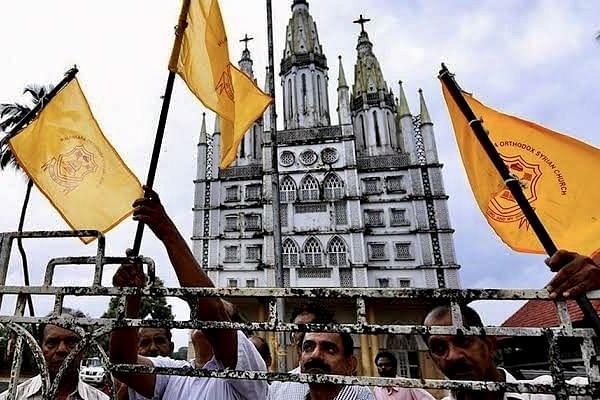 Tension prevailed as police today (Dec 13) rushed to block hundreds of Jacobite members, including women and children, attempting to re-occupy 52 parishes which were taken over by the Orthodox faction in Kerala following the Supreme Court order of 2017, The New Indian Express reported.

Jacobite church believers attempted to enter Marthoman Jacobite Syrian Cathedral Church at Mullanthuruthy and Kayamkulam Kattachira St.Mary’s church, both in Ernakulam district. But police closed the gates before their arrival and stood guard on the other side, preventing the protesters from entering the church premises.

The Jacobite members arrived at Mullanthuruthy church after offering prayers at the nearest church. The believers led by Jacobite church metropolitan trustee Joseph Mar Gregorius staged a protest in front of the church and offered prayers.

"We have lost 52 churches now and we have over 600 parishes left. It is on us to protect our churches. We will continue to protest against the injustices till a solution is reached. It is with great pain that we have accepted the verdict of the superior courts," The New Indian Express quoted Metropolitan Joseph Mar Gregorios as saying.

The Malankara Church split in 1912 into the Jacobite and Orthodox groups. They reunified in 1959 but the unification lasted only until 1973.

Since then, both the factions have been at loggerheads over the churches and properties of the Malankara Church. Besides dispute over 1,000 churches, a few of them have remained closed for years now and some are in dilapidated condition.

Mullanthuruthy church, said to have been built in AD 1200, was originally managed by Jacobite faction, but in July 2017, the Supreme Court of India ruled that the ownership of the church vests rival Orthodox Church.

Following the SC verdict, several churches under dispute have come under the custody of the Orthodox group despite fierce resistance from the Jacobite Church.

In August this year, Pinarayi Vijayan-led CPM government took control of the Mullanthuruthy church, which has been at the centre of a dispute between Jacobite and Orthodox factions of the Malankara Church, a non-Catholic Christian community in Kerala.

In Sep, CM Pinarayi Vijayan also held talks with two Christian factions — Jacobite and Orthodox — to settle a long-standing dispute over 1,000 churches between them. During the talks with the Chief Minister, the Jacobite faction sought a referendum on the issue of who should control which church, while the Orthodox faction insisted that the Supreme Court verdict be implemented.