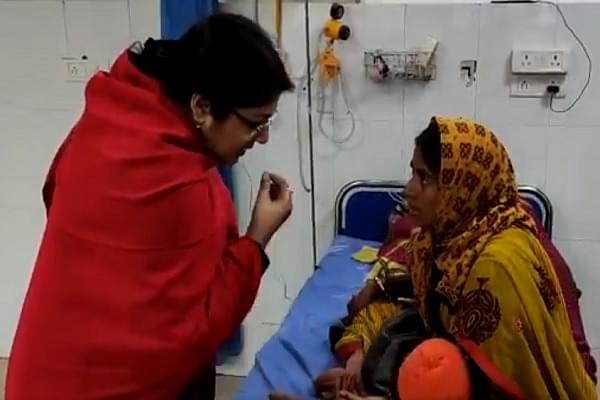 BJP MP Locket Chaterjee, a member of the fact finding panel, at the Kota hospital (Pic Via Twitter)

A day after the BJP formed a fact finding committee to inspect what led to the deaths of infants in Kota, the four-member panel visited a hospital in Kota district in Rajasthan on Tuesday (31 December) and interacted with the patients.

Soon after the visit, one of the members of the committee, Locket Chatterjee, took to twitter to lash out at the Congress-led Rajasthan government for its alleged failure.

She accused Rajasthan Chief Minister Ashok Gehlot of celebrating the JMM-Congress-RJD alliance's victory in Jharkhand Assembly polls when infants were dying in his state.

Taking a sharp dig at Rahul Gandhi, the BJP MP from West BEngal tweeted: "Mr. Rahul Gandhi must be busy in new year celebrations in Italy. If he gets time to visit other states, why not visit Rajasthan & see the grim situation?"

As many as 77 infants have died within a month in Kota, 12 of them within a week. In the last one year, over 940 child deaths have been reported.

Kanta Kardam (Uttar Pradesh), Jaskaur Meena (Rajasthan) and Bharti Pawar (Maharashtra) are the other members of the fact finding committee, which has now upped the ante on the Gehlot government.

The panel was set up on Monday (30 December) by BJP working President J P Nadda. It will submit its report within three days.