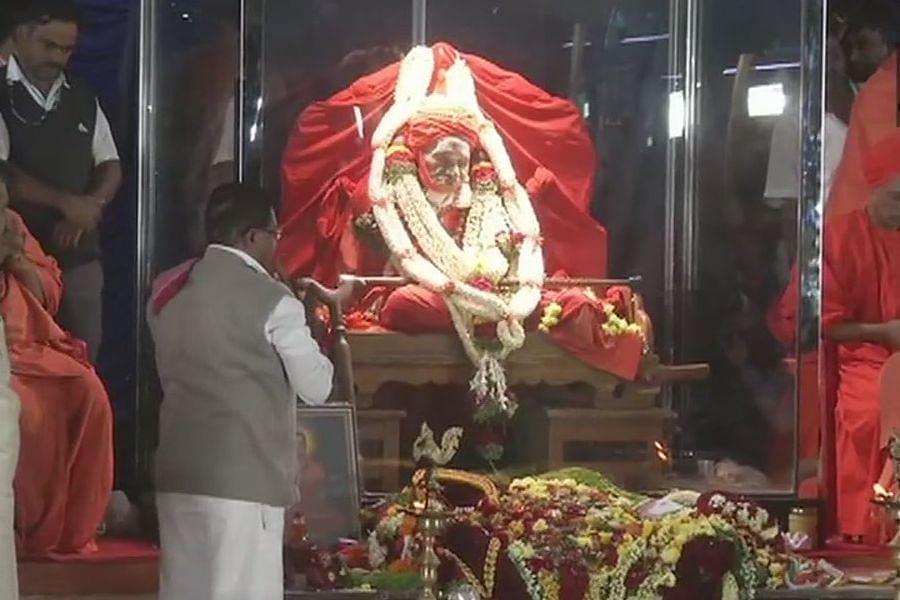 Devotees and saints, in huge numbers pay tribute to Shivakumara Swami of Siddaganga Mutt in Tumkur. (pic via Twitter)

Popularly known as ‘Nadedaduva Devaru’ or the ‘Walking God’ in Karnataka, Sri Shivakumara Swamiji, head of the Siddaganga Mutt in Tumakuru has been laid to rest with full state honours. He was 111 years-old and had passed away yesterday (21 January).

Swamiji’s body was buried in a sitting position at the mutt’s premises after observance of the last rites as per ‘Kriya Samadhi’.

Following the tragic death, Chief Minister (CM) H D Kumaraswamy announced a one-day state holiday and three days of mourning. Deputy Chief Minister Dr G Parameshwara and former CM B S Yeddyurappa have appealed for seer to be honoured with a posthumous Bharat Ratna award for his contributions as a humanitarian.

Security arrangements have been in place since the news was announced and over 5,000 policemen were deployed to maintain law and order. The seer was a recipient of Padma Bhushan and Karnataka Ratna. Siddalonga Mahaswami will be now taking over the reigns of the Lingayat Siddaganga Mutt in the state, Times of India reported.

To cater to the devotees, two special trains were operated between Yeshwantpur in Bengaluru and Tumakuru today (22 January) with the state bus department too running an additional 100 buses.