KSRTC Driver Who Allowed A Monkey To ‘Drive’ His Bus, Removed From Duty 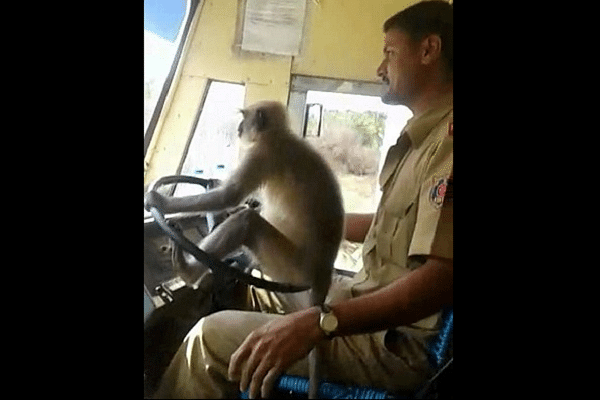 Recently a video went viral on social media which showed a Karnataka State Road Transport Corporation (KSRTC) driver allowing a monkey to steer his bus has now been removed from duty, Times of India has reported.

A video which recorded the incident saw the driver petting the Hanuman langur while it sat on the steering wheel and tried to help the driver in his duty. The bus in question was plying between Davanagere and Bharamasagara on 1 October.

A monkey driving the bus, video is from my state Karnataka. pic.twitter.com/S8GrrBdda0

This decision of Prakash - the driver, to get an assistant hasn’t gone down well with KSRTC whose official stated that, “We have removed the driver from duty and have asked the divisional security inspector to conduct an inquiry. He won’t be assigned any further duty till probe is completed; he could even be suspended”.

As per another KSRTC official, the monkey had boarded the bus with its trainer but later decided to make the steering wheel its seat. The driver who is a animal lover, obliged the primate, which sat with him for about two to three minutes before alighting.

There were no complaints from passengers post the incident.