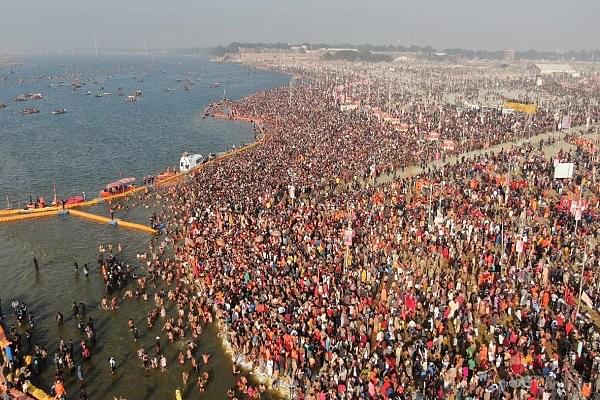 The devotees participated in the shahi snan at the confluence of the sacred rivers Ganga, Yamuna and the mythological Saraswati on Makar Sankranti reports The New Indian Express.

Mela authorities have estimated that total number of pilgrims who took the holy bath at the Sangam touched 2 crore mark between 14 and 15 January, with people approaching bathing ghats even till late in the evening.

Taking a holy dip at the Sangam is believed to wipe away all the sins of a person, while also emancipating him or her from the cycle of reincarnation.

The Ardh Kumbh at Prayagraj held every six years and is likely to be the largest congregation of humanity on the planet with 15 crore people expected to participate in the mela during the 50 days.

The first groups of people reaching the Kumbh were huge processions of 13 akharas or religious orders in accordance with time slots given to them.

The year’s Kumbh is much grander than previous ones, with an increase in the area of the mela as well as the budget.

"The magnitude of this year's Kumbh has gone up several notches. Besides the mela area going up from 1,400 hectares to 3,600 hectare, the budget has gone up to Rs 4,300 crore from last time's Rs 1,200 crore," stated a senior official of religious affairs department.