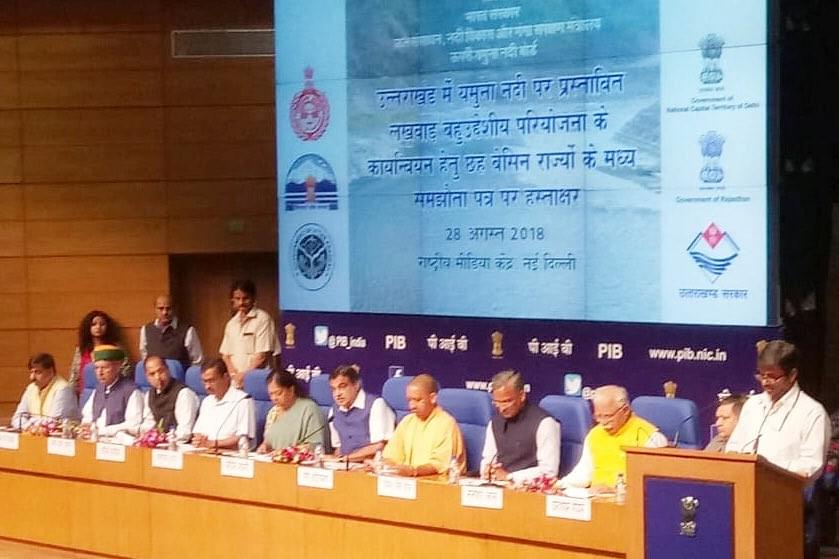 Nearly 42 years after it was first approved, the Central government today (28 August) signed a memorandum of understanding (MoU) with the chief ministers of six states for the Vyasi Lakhwar project in the Yamuna basin in North India, reports The Free Press Journal.

The MoU was signed between the Centre, chaired by Union Minister for Water Resources, River Development and Ganga Rejuvenation Nitin Gadkari and the states of Haryana, Himachal Pradesh, Rajasthan, Uttar Pradesh, Uttarakhand and the union territory of Delhi.

The Rs 3,966.51 crore project will see the development of a 204 m-tall structure being built on the Yamuna near Lohari in Uttarakhand with a live storage capacity of 330.66 million cubic metre (MCM). It will also irrigate 33,780 hectares of land, provide 78.83 MCM of water for drinking and other purposes while also generating 300 mW of electricity. It will be executed by the Uttarakhand Jal Vidyut Nigam Limited (UJVN). Funding will primarily be provided by the Centre which will foot 90 per cent of the bill and while the rest will come from the states.

Uttarakhand will invest 100% cost of (Rs 1388.28 cr) for developing the power generation component of the project. Rs 2578.23 crores will be spent on developing irrigation and water component & 90% of this cost will be borne by the centre with states sharing the remaining 10%.

Rs 1,388.28 crore to develop the power generation segment of the project which will be funded entirely by Uttarakhand.

Delhi will not face water problem for next 20-25 years after this project is completed.Cities in Rajasthan, Uttar Pradesh and Haryana will also gain from this project.

The Lakhwar Yamuna project was originally approved in 1976 and received environmental clearance in 1986. Initial construction took place between 1987 and 1992. The first MoU was signed in 1994 but the project went nowhere after that. It was revived in 2008 with construction restarting in 2013. Funding from the centre came in 2016 and the second MoU was signed this year.