Like Movies, Our Political Journey Will Be Different, Says Rajnikanth After Meeting With Kamal Haasan 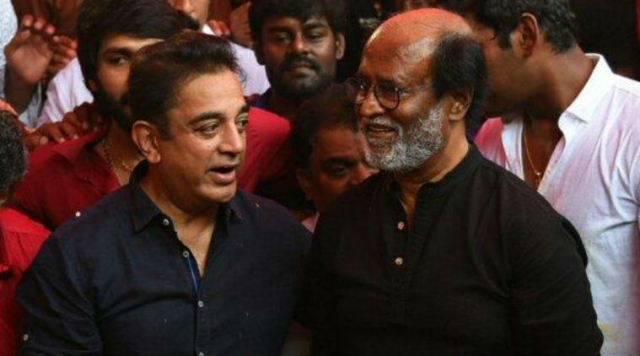 Tamil actors Rajnikanth and Kamal Haasan, who surprised political pundits with their meeting at the former’s Poes Garden residence on Sunday (18 February), are unlikely to have any alliance among them. Rajnikanth told reporters soon after their meeting that like cinema, our political journey will be different.

Reports in Tamil media said that the actors discussed on sidelining Dravidian parties but Kamal Haasan told media this morning that he would follow Dravidian politics and reap success. Kamal Haasan, who will likely float a new political party on 21 February (Wednesday) from the memorial of the late Abdul Kalaam, has been meeting a cross section of politicians cutting across party lines in the last few days.

Rajnikanth, on the other hand, has been going slow in launching his party. His immediate objective is to contest the next Assembly elections in Tamil Nadu. Though Tamil Nadu Assembly elections are due only in 2021, the polls could be held much earlier as the All India Anna Dravida Munnetra Kazhagam (AIADMK) Government led by Edappadi K Palaniswami (EPS) does not seem to be enjoying a majority in the floor of the house.

EPS could be asked to prove his majority on the floor once the Madras High Court gives its ruling on the expulsion of 18 legislators by the AIADMK and a petition filed by DMK Working President M K Stalin to disqualify Tamil Nadu Deputy Chief Minister O Panneerselvam (OPS) and 10 other legislators. Both the cases are being heard together by the High Court.

In a related development, T T V Dinkaran, nephew of the late Jayalalithaa’s aide Sasikala, is trying to launch his own party instead of trying and wresting AIADMK from EPS and OPS. Dinakaran is trying to launch the party as soon as possible to face the elections to the civic bodies.