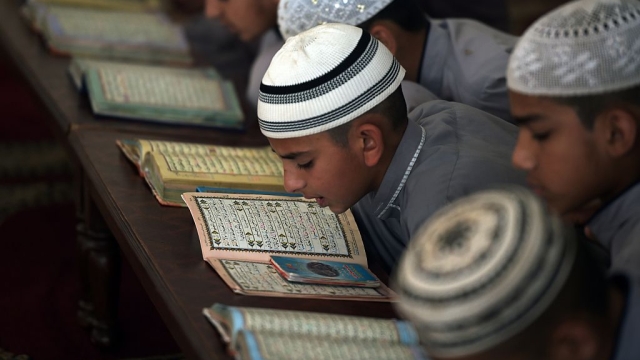 Students of a madrassa recite the Quran at their seminary. Photo credit: AAMIR QURESHI/AFP/GettyImages

The Education Minister of Assam Himanta Biswa Sarma, met madrassa teachers on Wednesday to discuss the issue of madrassas not staying open on Friday which the minister refused to agree upon.

Met madarsa teachers to inform that govt decision on keeping edu instns open on Friday is non-negotiable. Willing to discus all other issues pic.twitter.com/sdiqMhIhA0

This discussion was regarding a press conference on 28 November when Sarma a no-nonsense person praised for his administrative skills expressed his surprise on knowing that madrassas in 11 districts of Assam are closed on Fridays along with Sunday.

As a response he immediately declared that these madrassas cannot be permitted to take an extra holiday on Friday. But the students and teachers would be allowed a one-hour break on Friday afternoon for their 'Jummah Namaz' (Friday prayers) since that prayer is considered to be the most important by Muslims. The minister stated:

Madrassa teachers get their salaries from the government for working on Fridays. So why madrassas should remain closed on Fridays? There is no law which allows closure of madrassas on Fridays anywhere in India. Sunday is the only officially-sanctioned holiday for all institutions and establishments across the country.

Although opinions are divided on this decision of Sarma most accept that this move proves that the policy of minority-appeasement cannot be accepted any longer.