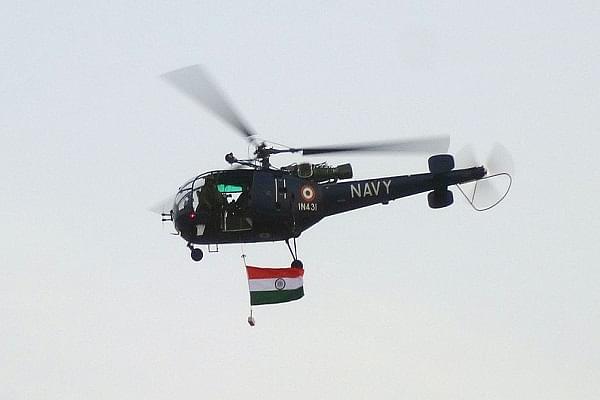 A naval HAL Chetak flying the Tricolour. (Pic by Nani1992/Wikipedia)

The Ministry of Defence is looking to invite private players to take part in a Rs 21,000 crore deal to acquire naval utility helicopters as the first instance of a project to be executed as per the strategic partnership (SP) policy envisioned under ‘Make in India’, reports The Economic Times.

The first ‘expression of interest’ (EoI) to private companies will come out soon in the coming days, with further plans to invite bids later for the indigenous manufacture of submarines, main battle tanks, fighter jets, etc depending on the success of the pilot SP project.

There will be several parameters that private firms will have to meet be eligible for the bid, such as having a minimum net worth of Rs 800 crore, revenue of at least Rs 1,800 crore and proven track record of delivering on mega projects.

Furthermore, applicant companies must have experience in the last three years of having dealt with defence manufacturing contracts with a total value of at least Rs 300 crore. The companies will also have to show that they can provide enough land to set up a helicopter manufacturing facility.

The project stems from the approval granted by the Defence Acquisition Council (DAC) in August 2018 to acquire 111 utility helicopters for induction into the Indian Navy.

The process of selecting the winning bid will involve first shortlisting Indian as well as foreign collaborators in a parallel exercise. Shortlisted applicants will then be required to come up with a joint commercial proposal and the lowest bid among these proposals would be announced the winner.

Indian companies expected to take part in the bidding process are Mahindra Defence, Tata Aerospace and Defence, Adani Defence and Reliance Defence while foreign players who could participate are Airbus Helicopters, Sikorsky and Russian Helicopters.