Make Way For Our Future Overlords: Robots To Take 6 Per Cent Of Jobs By 2021 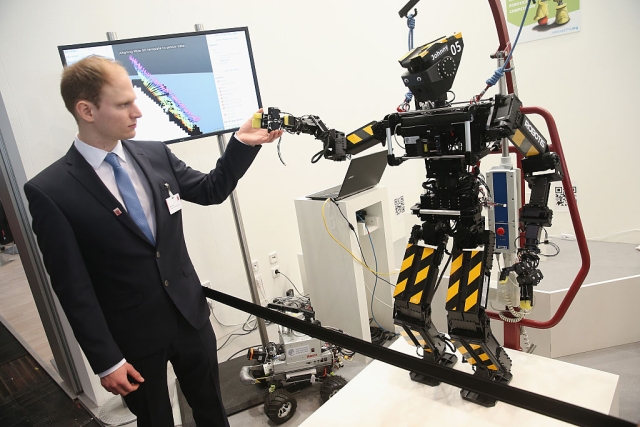 A stand host holds the hand of a robot developed by the University of Darmstadt. (Photo by Sean Gallup/Getty Images)

Robots are poised to replace interns as the unrewarded and unpaid worker ants of industry.

A study by Forrester Research has projected that by 2021, artificial intelligence will be sophisticated enough to push many outside of the job market. The advancement of technology could signal lights out for taxi drivers, bankers and customer service agents.

The Forrester Research report said that 6 per cent of jobs could be taken by “early-stage intelligent agents” as soon as 2021. The study cites Facebook, Amazon and Apple as being at the forefront of developing nuanced bots that rely on algorithms like Siri, and that they could eventually replace truck drivers.

Highlights of the report

- By 2025, about 16 per cent of jobs in the United States will be replaced while another 9 per cent will be created, resulting in a net loss of 7 per cent of US jobs.

- The most vulnerable sectors would include office and administrative support staff.

- Over 93 per cent of the technicians trained to work in automation and robotics feel unprepared to deal with the complexities.

But those industries aren’t the only ones where flesh-and-bone employees will be replaced with something more mechanical. Researchers at the World Economic Forum have grimmer predictions. They see 7.1 million jobs being replaced with algorithms, two-thirds of which will be “concentrated in the Office and Administrative job family,” Digital Trends reported.

Self-driving cars are set to hit the market within the next decade, which is a direct threat to the taxi and trucking industries – as well as the auto industry itself. The sales of vehicles could sink 40 per cent over the next 25 years if self-driving cars become viable in the marketplace, according to a 2015 report from Barclays analyst Brian Johnson.

As if that wasn’t enough, robots could replace surly teenagers behind the counters of fast food restaurants too. Carl’s Jr CEO Andy Puzder is so confident in intelligence agents (IA) that he expressed an interest in investing in the technology he witnessed at Eatsa, a fully automated restaurant in Canoga Park, California.

A part of this report was published at rt.com