Meghalaya: Navy Divers Join Rescue Operations For Miners Trapped In A Flooded Rat-Hole Coal Mine For More Than 15 Days 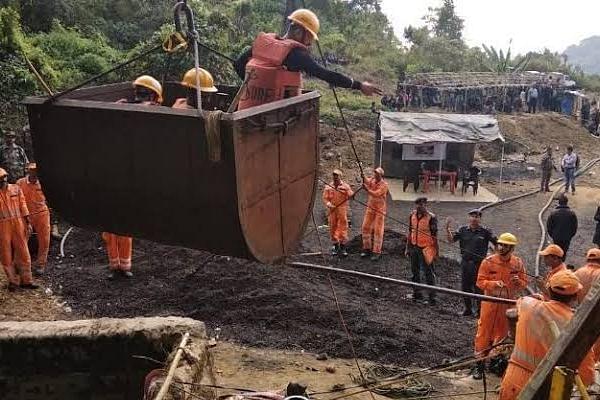 In a ray of hope for the stranded minors in Meghalaya, a senior official has said that a group of divers from the Indian Navy have arrived from Vishakapatnam on Saturday (29 December) to join rescue operations for the miners trapped in a flooded rat-hole coal mine since 13 December, reports Livemint.

The 15-member team which has been equipped with specialised diving equipment which includes remotely operated vehicles capable of searching underwater and a re-compression chamber went directly to the site of the mine near the remote Lumthari village in the East Jaintia Hills district.

The entire rescue operation was supervised by NDRF personnel who briefed the team as they have run point on the operations since 14 December, said a senior official of the East Janitia Hills district.

District Superintendent of Police, Sylvester Nongtynger, said that a team of rescuers with ten high-powered Kirloskar pumps have also reached the spot from Bhubaneshwar.

The pumps are expected to begin operation at any moment as the Mechanical team finishes their preparatory work, said the SP.

On 14 December, the rat-hole mine located on top of a hill and entirely covered with trees got flooded when excessive water from the nearby Lytein river gushed into it, hence trapping the 15 diggers.

Media reports on Thursday (27 December) which said that the trapped miners were suspected to be dead due to the foul odour the divers had smelt when they went inside the mine, has been contradicted by the National Disaster Response Force (NRDF). They had said that the foul smell could be emitted due to the stagnant water in the mine as pumping has been halted for more than 48 hours.