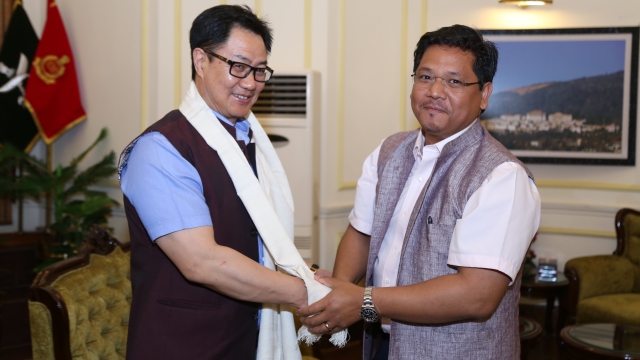 Minister of State of the Ministry of Youth Affairs and Sports Kiren Rijiju with Megahalaya CM Conrad Sangma. (via Twitter)

Meghalaya Sports and Youth Affairs Minister Banteidor Lyngdoh on Tuesday (12 November) said the Centre will provide Rs 170 crore to the state government to develop sports infrastructures for the National Games 2022.

Meghalaya will be the third northeastern state, after Manipur (1999) and Assam (2007), to host the National Games. The national event will coincide with the 50 year of the creation of Meghalaya.

"The Ministry of Social Justice and Empowerment has decided to reduce the amount to Rs 170 crore only to develop sports infrastructures for the National Games 2022. They justified that the reduction was based on the conditions and requirement of fund with the ministry," Lyngdoh said.

Union Minister for Social Justice and Empowerment Thaawarchand Gehlot had publicly announced that his ministry would set up one of the five National Sports stadiums of international standard for differently-abled in Meghalaya at over Rs 200 crore.

However, Lyngdoh is hopeful that the Union Cabinet would give its seal of approval to sanction the amount to develop the international sports infrastructures in the state.

Meghalaya's Department of Sports and Youth Affairs had signed a Memorandum of Understanding (MoU) with Hindustan Steelworks Construction Limited (HSCL) as the Project Management Consultant (PMC) for development of sports infrastructures.

"The PMC is in process of preparing the detailed estimates and designs related to construction of the games village. We are hopeful that by December, they (PMC) should be able to float tenders," the Sports Minister said.

Founder-chairperson of Reliance Foundation, Nita Ambani had voiced her keen interest to partner with the Meghalaya government in building sports infrastructure ahead of the National Games.

"We would love to talk to the government and help in every possible way for the national games," Ambani has recently said here.

Meghalaya had co-hosted the 2016 South Asian Games with Assam.