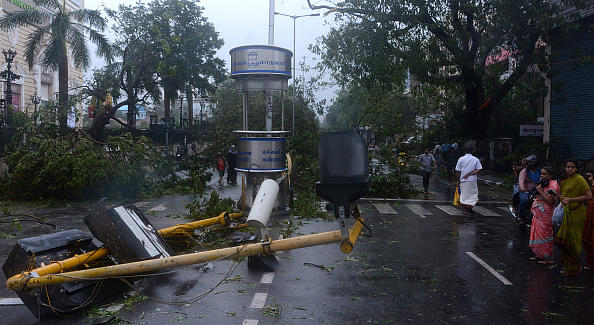 Residents stand near fallen trees and traffic signal post on a street in Chennai after Cyclone Vardah wreaked havoc in the city. (STR/AFP/GettyImages)

Cyclone Vardah Mayhem: Cyclone Vardah hit the southeast coast of India on Monday, bringing down trees and power lines as authorities moved thousands of people from low-lying areas. Heavy rains lashed parts of Tamil Nadu and Andhra Pradesh. At least 10 people were killed due to wall collapses triggered by wind and torrential rain in Chennai.

Discount On Digital Payments For Fuel: A discount of 0.75 per cent on petrol and diesel will kick-in from Tuesday on fuel purchases made using digital payment. The discount on payments made using either credit/debit cards, e-wallets or mobile wallets will translate into a rebate of 49 paisa a litre on petrol and 41 paisa on diesel.

China’s India Stand Unchanged: India’s efforts to secure China’s backing for its membership of Nuclear Suppliers Group and getting Jaish-e-Mohammed chief Masood Azhar designated as a terrorist by the United Nations seems to have met with no success with Beijing on Monday saying its stand on the two key issues “remains unchanged”.

TCS Vote To Decide Mistry’s Fate: Tata Consultancy Services (TCS) shareholders will decide the fate of Cyrus Mistry on Tuesday when a resolution to remove him as the company’s director will be put to vote at the extraordinary general meeting (EGM). On Monday, Tata Industries, at its EGM, removed Mistry as director in the company.

12 Arrested For Disrespecting National Anthem: Twelve people, including two women, were detained by police for not standing while the National Anthem was being played at the International Film Festival of Kerala in Thiruvananthapuram on Monday. In a Chennai cinema hall, eight people, including three women, were assaulted by a group of 20 for not standing when the anthem was being played.

India To See Highest Salary Increases In 2017, Says Report: A report by a global consulting firm said that India and Vietnam will have the highest salary increases next year with a projected rise of 10.8 per cent and 9.2 per cent respectively, among Asia Pacific’s emerging economies. The report by Mercer says that Japan is forecast to receive the lowest increase of 2.2 per cent.

India Among Most Vacation-Deprived Countries, Says Survey: India has been ranked as the fourth most vacation-deprived country globally, according to a travel survey. Online travel company Expedia's 2016 vacation deprivation study also found that 71 per cent Indians cancelled or postponed vacation plans due to work.

Guterres Sworn In As UN Secretary General: Former Portuguese Prime Minister Antonio Guterres was sworn in on Monday as the ninth United Nations secretary general, pledging to personally help broker peace in various conflicts and reform the 71-year old world body to become more effective. He will take over duties from Ban Ki-moon.

UK Planning To Cut Student Visas: The British government is finalising plans to cut annual student visa figures from the current 300,000 to 170,000, a media report said on Monday. The move comes in the backdrop of a sharp fall in international students, including Indians, going to British colleges and universities.

PM Narendra Modi’s Gamble, Objective And Key Assembly Polls: It was evident from the outset that demonetisation, though an economic step, was taken with political objective in mind.

Architecture Of World-Class Institutions: Knowledge creation and application of knowledge are two paths towards creating world-class institutions in India.

Software Policy 2.0: The New Paradigm: We hope the long-pending National Policy on Software Products will be announced soon. Only then will the Prime Minister’s dream of rapid transformation become a reality to catalyse an Indian Software 2.0 industry.

Go South With The India Stack: With “Make in India” now an imperative, it might behove us to think of emerging economies with similar characteristics as our own as being potential markets for products made in India.

With 30 December Approaching, Government Must Be Ready With Demonetisation Endgame: With demonetisation drive entering its final phase, the time to start planning for the post-30 December phase is now.

Will Nuclear Energy Power India’s Future? It might already be too late to ask that question because if India has to meet its gigantic energy needs in the future, nuclear energy has to be the area of focus.

Currency Recall – Modi’s Austerlitz Or Waterloo? I don’t think sudden currency recall will be Modi’s Austerlitz. But hopefully it may not be his Waterloo either. It may be a hard battle that teaches Modi to seriously upgrade talent in his Cabinet.

What Flipkart And Ola Want Is Not Really “Good Protectionism”: What the CEOs of Ola and Flipkart seem to be implying is that while they can disrupt the business of taxi drivers and small traders, it is unfair of Amazon and Uber to do the same to Flipkart and Ola.