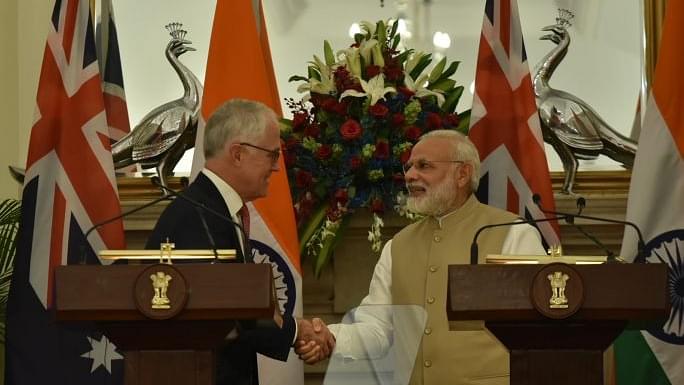 India-Australia Vow To Fight Terror: India and Australia are stepping up co-operation to jointly fight the menace of global terrorism. The two countries on Monday signed a memorandum of understanding on co-operation in combating international terrorism and transnational organised crime during bilateral talks between Prime Minister Narendra Modi and his visiting Australian counterpart Malcolm Turnbull. This was one of the six agreements, including one pertaining to “civil aviation security”, which were signed in the presence of the two leaders at Hyderabad House.

India Retaliates: After Pakistan announced that it will execute former Indian Navy officer Kulbhushan Jadhav arrested there last year on charges of espionage, India retaliated by deciding it will not release 12 Pakistani prisoners who were cleared to return home today. “If this sentence against an Indian citizen, awarded without observing basic norms of law and justice, is carried out, the Government and people of India will regard it as a case of premeditated murder,” India’s Foreign Secretary Jaishankar said. Meanwhile, Amnesty International has condemned Pakistan over Jadhav’s death sentence.

Declare Triple Talaq Unconstitutional, Centre Urges SC: The central government on Monday urged the Supreme Court (SC) to declare triple talaq and polygamy unconstitutional, maintaining that such Islamic practices “impact the social status and dignity of women”. The government said Islam too did not sanction these practices and that they existed due to social norms centuries ago. The government note stated that triple talaq rendered Muslim women vulnerable and without any security, unlike women of other religions.

Army Foils Major Infiltration Bid, Kills Four Militants: The Indian Army on Monday claimed to have foiled a major infiltration bid after it killed suspected militants along the Line of Control in the frontier district of Kupwara. Four militants were gunned down, when they were trying to infiltrate into the Kashmir valley through the Keran sector, the Army said. “We have recovered their bodies and four AK-47 weapons. Their identity has not been confirmed yet,” army spokesperson Rajesh Kalia said.

Madhya Pradesh: Chauhan Pushes For Phased Prohibition: Madhya Pradesh Chief Minister Shivraj Singh Chauhan said his government will introduce prohibition on liquor shops in a phased manner. This comes following protests in several parts of the states against liquor shops. Chauhan said the state will begin a de-addiction drive. “In the first phase, shops within 5 km of the Narmada have been closed. Now shops near educational institutions, residential areas and religious places will be closed down and then prohibition will be imposed,’’ said the Chief Minister.

EVMs Row: Poll Panel May Call All-Party Meeting: The row over electronic voting machines (EVMs) seems to be escalating. The Election Commission of India (ECI) is likely to convene an all-party meeting to discuss the reliability of EVMs, after 16 opposition parties wrote to the poll monitor urging it to revert to paper ballot system. “ECI to convene an all-party meet to discuss reliability of EVMs,” Congress leader Kapil Sibal said. The controversy surrounding the EVMs came to the fore once again after a machine used during a trial in Madhya Pradesh reportedly printed out Bharatiya Janata Party slips.

Government Gets Tough On Traffic Offences: In a move that can transform the transportation sector in India, the Lok Sabha on Monday cleared amendments to the motor vehicles law that will substantially increase the penalty for traffic violations, allow learner’s driving licences to be issued online and penalise contractors for faulty road designs. The bill also seeks statuary guidelines for cab aggregators and a 10 per cent annual increase in penalties for traffic rule violations. The bill will now be tabled in the Rajya Sabha.

Petrol Pump Owners Up In Arms: Petrol pump owners have threatened to not purchase petrol and diesel for a day on 10 May and subsequently shut outlets every Sunday if their demand of higher margin is not agreed upon by the government. The weekly ‘Sunday off’ will start from 14 May while from 15 May, dealers will operate from 9am to 6pm to cut costs.

India Is A One-Party State: After 70 years of independence, around half the workforce is engaged in farming. Future bailouts are dead certain. Farm loan waivers are an indictment of India’s failed economic development model, of its romancing of informality, subsistence farming and poverty.

Is The Ban On BS-III Vehicles Really Bad? We are still far from the widespread adoption of electric cars or biking to our offices, but BS-III norms should go beyond the immediate short-term pains for the industry and augur well in the long-run for aggregate upstream and downstream innovation productivity of suppliers in India’s auto market.

Budgeting For The Police: Budgets barely allocate funds for operational expenses of running police stations, or maintenance costs for computer systems, arms and ammunition. Higher allocations by themselves are not enough, the structure of budgetary allocations can have an impact on police performance.

Loan Waiver Is Not The Solution To Farm Crisis: The demand for loan waivers has not only spread now to other states but will continue to remain the major way through which governments appease a section of farmers. While farm loan waiver does yield political dividend, it causes systemic damage to the farm credit market and does nothing to end the debt traps five years from now.

Cow Slaughter: More Than A Ban, What We Need Is An Effective Case Against It: Instead of extending a ban on cow slaughter, the government needs a rational policy on preserving cow species, tapping their economic potential, and incentivising the creation of animal shelters all over the country.