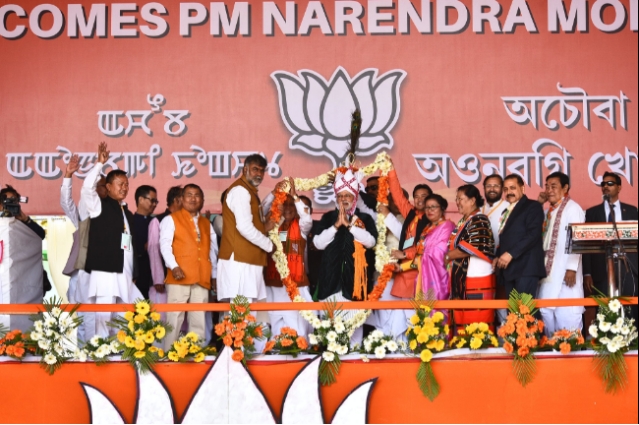 Prime Minister Narendra Modi is welcomed by party workers ahead of his election speech in Imphal. (Prime Minister’s Twitter Page)

Prime Minister Narendra Modi launched a scathing attack on the ruling Congress in Manipur, accusing the party of trying to divide people for political gains. He assured the people that the Naga Accord would not jeopardise the territorial integrity of the state.

Speaking at an election rally in Imphal, Modi said: "The framework agreement was signed on 3 August 2015 and now the state government is raking up the issue with the election in view. Chief Minister Okram Ibobi Singh and others have been spreading lies to the people on the issue."

The Prime Minister held the state government responsible for the economic blockade and assured that once a Bharatiya Janata Party (BJP) government is formed in Manipur, there will be no more blockade.

"The centre is ready to give all assistances to end the blockade. The Congress government which has caused hardships to the people does not have the right to stick to power," he said and added that unity of Manipur, welfare of its people and development of the state is our only goal. “You gave them (Congress) 15 years, give us five years. I assure you we'll complete the pending work in 15 months," he said.

The state assembly elections were scheduled to be held in two phases – March 4 and 8 – to elect 60 members.

Also Read: The Nagaland Accord: A Splendid Breakthrough