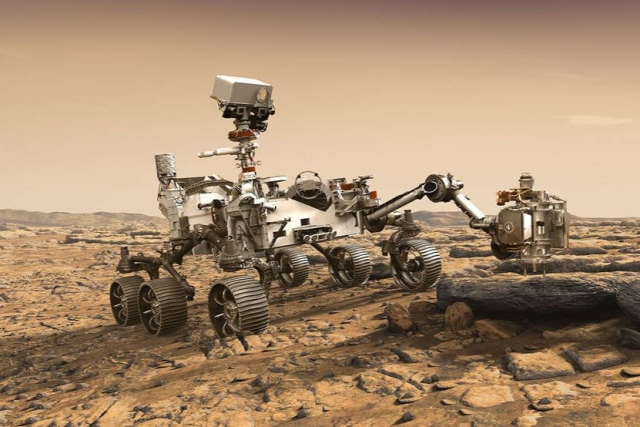 NASA has released a new video from its Mars 2020 Perseverance rover chronicles major milestones during the final minutes of its entry, descent, and landing (EDL) on the Red Planet on February 18.

Your front-row seat to my Mars landing is here. Watch how we did it.#CountdownToMars pic.twitter.com/Avv13dSVmQ

A microphone on the rover also has provided the first audio recording of sounds from Mars.

About 10 seconds into the 60-second recording, a Martian breeze is audible for a few seconds, as are mechanical sounds of the rover operating on the surface.

From the moment of parachute inflation, the camera system covers the entirety of the descent process, showing some of the rover's intense ride to Mars' Jezero Crater.

"For those who wonder how you land on Mars - or why it is so difficult - or how cool it would be to do so - you need look no further," Acting NASA Administrator Steve Jurczyk said in a statement.

Now that youâve seen Mars, hear it. Grab some headphones and listen to the first sounds captured by one of my microphones. ð§https://t.co/JswvAWC2IP#CountdownToMars

The world's most intimate view of a Mars landing begins about 230 seconds after the spacecraft entered the Red Planet's upper atmosphere at 20,100 e kilometre per hour. The video opens in black, with the camera lens still covered within the parachute compartment.

Within less than a second, the spacecraft's parachute deploys and transforms from a compressed 46-by-66 centimetre cylinder of nylon, Technora, and Kevlar into a fully inflated 21.5-meter-wide canopy -- the largest ever sent to Mars.

The tens of thousands of pounds of force that the parachute generates in such a short period stresses both the parachute and the vehicle.

"Now we finally have a front-row view to what we call 'the seven minutes of terror' while landing on Mars," said Michael Watkins, Director of NASA's Jet Propulsion Laboratory in Southern California, which manages the mission for the agency.

"From the explosive opening of the parachute to the landing rockets' plume sending dust and debris flying at touchdown, it's absolutely awe-inspiring."

The video also captures the heat shield dropping away after protecting Perseverance from scorching temperatures during its entry into the Martian atmosphere.

The downward view from the rover sways gently like a pendulum as the descent stage, with Perseverance attached, hangs from the back shell and parachute.

The Martian landscape quickly pitches as the descent stage - the rover's free-flying "jetpack," which decelerates using rocket engines and then lowers the rover on cables to the surface -- breaks free, its eight thrusters engaging to put distance between it and the now-discarded back shell and the parachute.

Then, 80 seconds and 2,130 metres later, the cameras capture the descent stage performing the sky crane maneuver over the landing site -- the plume of its rocket engines kicking up dust and small rocks that have likely been in place for billions of years.

The footage ends with Perseverance's aluminium wheels making contact with the surface at 2.6 kph, and then pyrotechnically fired blades sever the cables connecting it to the still-hovering descent stage.

The descent stage then climbs and accelerates away in the preplanned flyaway manoeuvre.

A key objective of Perseverance's mission on Mars is astrobiology, including the search for signs of ancient microbial life.