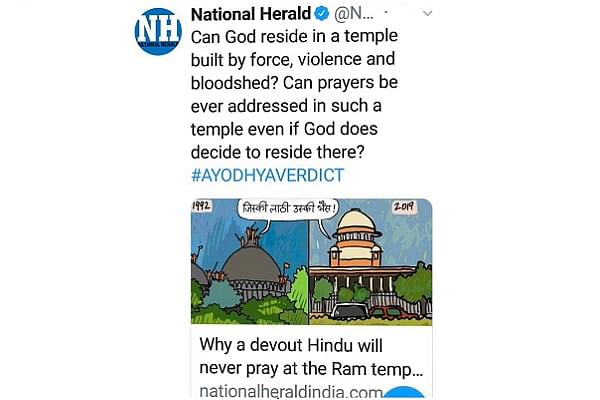 A day after the Congress welcomed the Ayodhya judgement, saying it is in support of construction of Ram Mandir, party's mouthpiece 'National Herald' incorporated an article contrary to the party's stand.

After BJP attacked the Congress over the issue, National Herald removed the controversial article from its website and deleted its link from Social media as well.

The National Herald tweeted an apology: "We apologise if the article "Why devout Hindu 'hurt anyone or any group's sentiments. The views expressed in the article are the author's personal views and do not reflect those of #NationalHerald."

We apologise if the article âWhy a devout Hindu...â hurt anyone or any groupâs sentiments. The views expressed in the article are authorâs personal views and do not reflect those of #NationalHerald https://t.co/J1r9GlsVHv

The apology has been offered by Editor-In-Chief after the Congress leadership showed displeasure. Sources say that the party leadership is upset with the way National Herald uploaded its article on the website.

The National Herald trustee includes Moti Lal Vora, but the day to day affairs is managed by a close aide of Rahul Gandhi, Kanishka Singh.