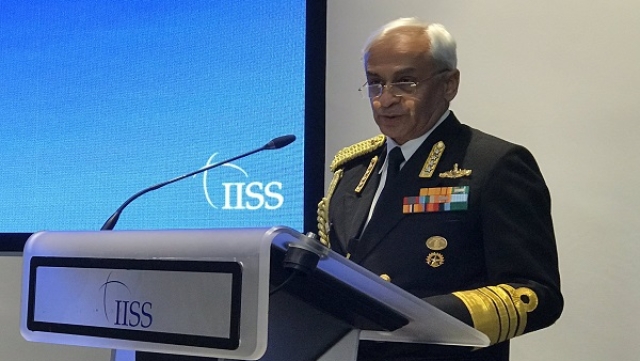 Admiral Sunil Lanba speaking at the IISS in London (@IISS_org)

The chief of naval staff, Admiral Sunil Lanba, has stated that India has been maintaining ‘a very close eye’ on China’s naval build up in the Indian Ocean, reports Hindustan Times. China has added six submarines to its force in the area in recent years, asserting that it is an anti-piracy measure.

Lanba was speaking before policy-makers, researchers, and Indian and British naval officers at the International Institute for Strategic Studies (IISS) in London. The naval chief told the audience that it was not likely that the Chinese presence in the Indian Ocean would go away.

Also part of the interaction was First Sea Lord and the Chief of Naval Staff, Admiral Philip Jones.

“The Chinese presence in the Indian Ocean started in 2008. It has grown over the years. At any given time, there are six to eight Chinese units in the northern part of the Indian Ocean. They are permanently present and they have three to four survey vessels or hydrographic vessels,” Lanba remarked.

He recounted how the numbers of Chinese naval vessels there had swelled to 14 for some time in mid-2017. He added that since 2015, the total number of submarine deployments had been six, with the Chinese claiming that the move was part of anti-piracy patrols. Lanba was candid about his cynicism about such an explanation

The naval chief also detailed the rapid pace of growth in Chinese naval infrastructure. He said that no country had invested as much money into building its navy as China, with the country having commissioned 80 new ships in just the past five years.

“No nation can match the productivity of their shipyards. So it is a challenge, we keep a close eye,” he stated.

IISS senior fellow for South Asia Rahul Roy-Chaudhury saw the British naval chief sharing a platform with his Indian counterpart as making for a powerful message to India.

“....And, in a strong message to the UK, the visit of India’s naval chief took place despite India’s ongoing tensions with Pakistan,” he remarked.