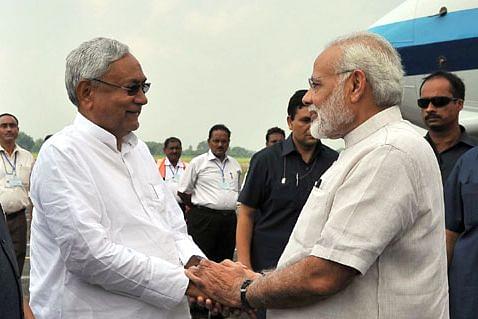 Bihar Chief Minister (CM) Nitish Kumar on Tuesday (6 October) announced the seat-sharing plan among the constituents of the National Democratic Alliance (NDA) for the Bihar Assembly election. The BJP will contest 121 seats while Nitish's JD-U has 122 seats.

He said, "We are not concerned with what someone speculates. We are working together and will do so."

The Lok Janshakti Party (LJP) led by Chirag Paswan, recently, decided to parts ways with the NDA in Bihar and go solo in the upcoming assembly polls. The decision was taken in party's parliamentary board meeting on Sunday.

The party decided that it won't go to elections as part of the NDA as incumbent CM Nitish Kumar is the face of the alliance, it was reported. The LJP had already made it clear that it was not willing to contest elections under Kumar.

However, earlier, Bihar BJP chief Sanjay Jaiswal reiterated that the NDA is contesting the Bihar polls under the leadership of Chief Minister Nitish Kumar.