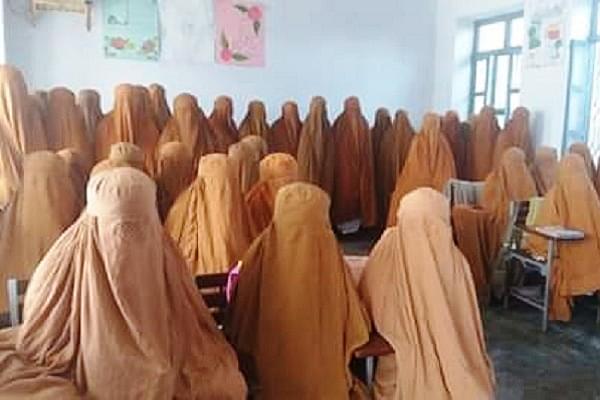 Schoolgirls wearing the burkha distributed to them (@NailaInayat/Twitter)

The leader has been identified as Muzafar Shah, who acts as the Union Council Palo Dheri Cheena Village Councillor.

He claimed that he had earlier considered purchasing Chadors (used to wrap on one’s head) but decided to buy full length Burqas instead after consulting local leaders. The burqas cost Rs 1,000 per piece and a total of 100 were purchased by the leader.

When asked about his motivation for this purchase, Shah claimed that it was inspired by a recent notification by the adviser to Khyber-Pakhtunkhwa (K-P) Chief Minister directing school girls to compulsorily observe Purdah.

“The act is purely for the providing a secured education environment to the female students in the area”, Shah was quoted as saying.

The notification for compulsory Purdah though was soon withdrawn by the K-P Chief Minister by citing that he was not consulted regarding this decision.