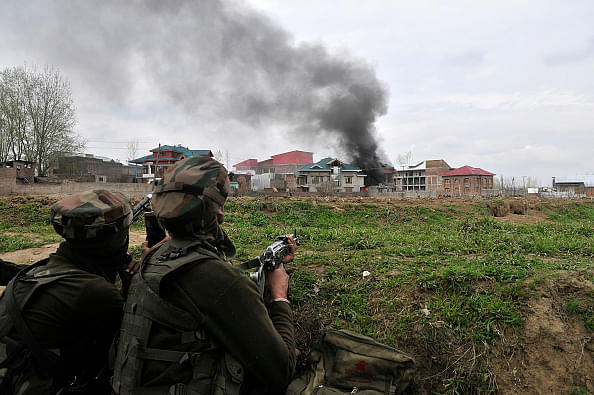 Security forces during an operation in Budgam in March. (Photo by Waseem Andrabi/Hindustan Times via Getty Images)

Notorious for his involvement in the killing of Rising Kashmir editor Shujaat Bukhari, Pakistani Lashkar-e-Toiba commander, Naveed Jatt, was killed in a security operation today (Wednesday, 28 November) in Budgam district of the Kashmir valley, reported The Indian Express. Police records show that Jatt had previously trained with 26/11 attacker Ajmal Kasab in Pakistan.

Announcing Jatt’s elimination, Jammu and Kashmir Police chief Dilbagh Singh said, “We’ll be writing to the home ministry to inform Pakistan to take back the body. It was a swift operation carried out by security forces. We finally got the prize catch Naveed Jatt. He has managed to give us the slip in six different encounters but today our boys managed to pin him down.”

Jatt had escaped this year from SMHS Hospital in Srinagar after spending several years in police custody since June 2014. He has also been involved in other terror attacks previously such as grenade attacks killing CRPF soldiers in 2013 and an attack killing a police Assistant Sub-Inspector (ASI) in Pulwama in 2013. Police records reveal that Jatt belonged to Multan in Pakistan and had trained with 26/11 terrorist Kasab.

The encounter began earlier today in Chattergam village of Budgam after the terrorists opened fire on security forces during a cordon-and-search operation. Internet services have been blocked in the district.

Bukhari, editor-in-chief and founder of Rising Kashmir, had been shot dead by three bike-borne gunmen in June near his office. Two security personnel had also been martyred in the attack.