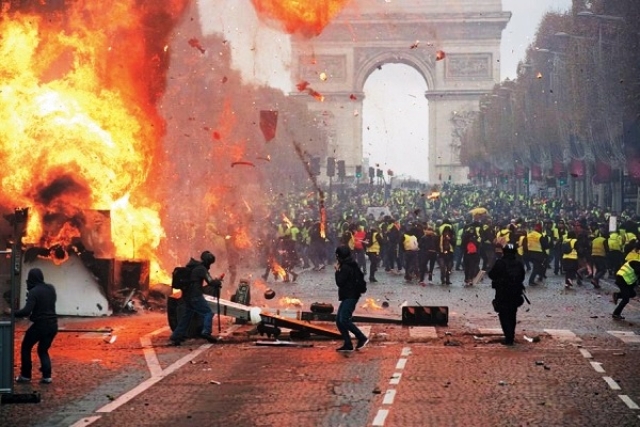 French President Emmanuel Macron on Sunday (2 November) held an emergency meeting at the Elysee presidential palace to further strengthen security measures in the wake of a demonstration on Saturday (1 November) in Paris, against the rising taxes on fuel, turning into the worst urban riot in a decade, Washington Post has reported.

French President, in his security meeting, asked interior minister to make amendments in security measures to contain the ongoing protests against the rising fuel taxes.

Earlier, Macron visited the sites where rioters had damaged the public properties and met with firefighters, police officers and restaurant owners.

More than 400 protesters, including many minors, were held by the French police after the clash between them and the protesters at the Arc de Triomphe and other places in Paris.

The police had to use tear gas and water cannons to control the protesters who were torching cars, breaking windows and looting stores in the streets of the French capital.

Paris police said 133 people including 33 police officers were injured during the violent protest.

French Prime Minister Eduardo Philippe said more than 36,000 people, including 5,500 in the Paris, were protesting across the country.

Paris Police Prefect Michel Delpuech, citing some police officers at protest, said the protesters were using hammers, bolts, aerosol cans as well as rocks during the physical confrontations. The protesters torched 130 makeshift barricades and 112 vehicles as well as started fires at six buildings, he said.

Delpuech said the riot involved some radical far-right and far-left activists along with a large number of protesters wearing yellow jackets, a mark of a grassroots citizens’ movement protesting fuel taxes.