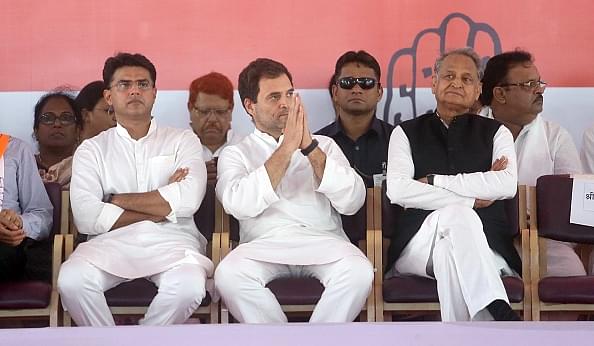 Sachin Pilot, a Gujjar, has proved that his community backs him in toto. None of the Gujjar candidates fielded by BJP won the 2018 Assembly polls in Rajasthan.

Even as the Congress high command is yet to officially announce its chief ministerial candidate in Rajasthan, violent protests erupted in many parts of the state, including Ajmer, Karauli and Dausa as members belonging to the Gujjar community took to the streets demanding that State Congress chief Sachin Pilot be chosen as the next Chief Minister.

Gujjars, who completely consolidated behind the Congress in the just concluded Assembly elections, were hoping that Pilot, who belongs to the community, will be made the next Chief Minister. Not a single Gujjar candidate won from the BJP despite the party fielding nine of them. Pilot is seen as someone carrying forward the legacy of his late father, Rajesh Pilot, who was an influential leader of the community.

The Gandhis - Sonia, Rahul and Priyanka - were engaged in hectic parleys with Congress functionaries as their handpicked nominee for the job in Rajasthan, Ashok Gehlot, faced fierce resistance from the young dynast Pilot.

The party high command had to intervene and appeal for peace as the stand-off between supporters of both Pilot and Gehlot turned into a street fracas.
At Pataoli, a Gujjar-dominated area, a hundred-odd protesters gathered at a bus stand in Dausa district on the Jaipur-Agra highway and blocked traffic. Times of India quoted NRK Reddy, Additional Director General of Police (Law and Order) as saying that, “Some of them even brought a tyre and set it on fire. Police reached the spot and dispersed them. The commotion was witnessed merely for 20 minutes.”

Heavy security had to be deployed at the Jaipur airport, Pradesh Congress committee (PCC) office and Raj Bhawan to maintain peace.

Gehlot, also the AICC general secretary in-charge of the organisation, appealed to his followers to maintain calm and claimed that the party high command was in the midst of a democratic process to find a suitable person for the post.

“I appeal to workers to maintain peace. Today, the party needs its workers. The Congress president has already credited the workers for their hard work in ensuring the party’s victory in Rajasthan, Madhya Pradesh and Chhattisgarh,” he said, and added that the decision of the Congress president will be acceptable to all.

Paradoxically, it was Congress falling short of a majority mark in Rajasthan, despite predictions of a landslide win, that brightened the prospects of Ashok Gehlot’s elevation as Chief Minister for the third time.

The Congress was expected to pick Gehlot, a calculated operator, not given to rhetorical flourish, to lead the state in the event of a slender majority. He is seen as someone who can run a well-oiled patronage machinery without upsetting the complex caste calculus of the state.

According to many political observers in the state, a sweeping victory in Rajasthan may have tempted the leadership to consider the possibility of Congress pitchforking Pilot to the post of CM.

Gehlot, who hails from a numerically insignificant OBC community, is expected to navigate the caste cauldron without upsetting four major social groups.