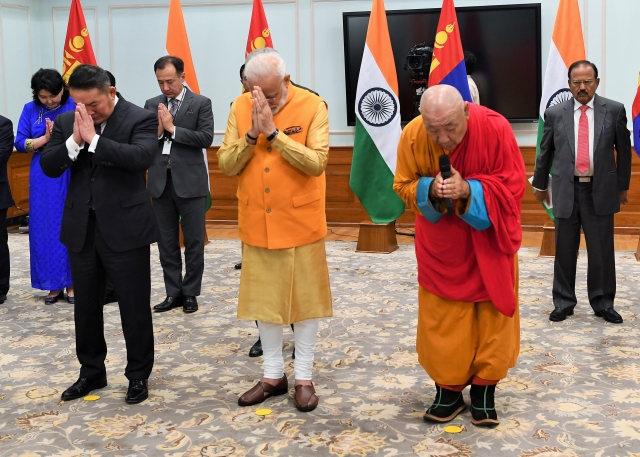 PM Modi with the Mongolian President (L) at the unveiling. (via Twitter)

Prime Minister Narendra Modi and Mongolian President Khaltmaagiin Battulga on Friday jointly unveiled through video conferencing a statue of the Buddha and his two disciples installed at the historic Gandan Tegchenling Monastery in Mongolia's capital Ulaanbaatar, said the Ministry of External Affairs.

"The statue symbolises the shared respect of our two countries for the universal message of Lord Buddha," the MEA said.

The ministry said that the Prime Minister had offered prayers at the Gandan Tegchenling Monastery during his visit to Mongolia in 2015 and had announced to gift a statue of Buddha to the monastery, underlining the common Buddhist heritage and civilisational links between the two countries and peoples.

The statue depicts Buddha in a sitting posture along with his two disciples conveying the message of compassion along with peace and coexistence. The statue was installed and consecrated at the Gandan Monastery earlier this month during the third edition of "SAMVAAD" dialogue held in Ulaanbaatar from September 6-7.

Gandan Tegchenling Monastery is a prominent centre of Mongolian Buddhists and a treasure house of valuable Buddhist heritage. It hosted the 11th General Assembly of Asian Buddhist Conference for Peace (ABCP) from June 21-23, marking the 50th anniversary of the conference.