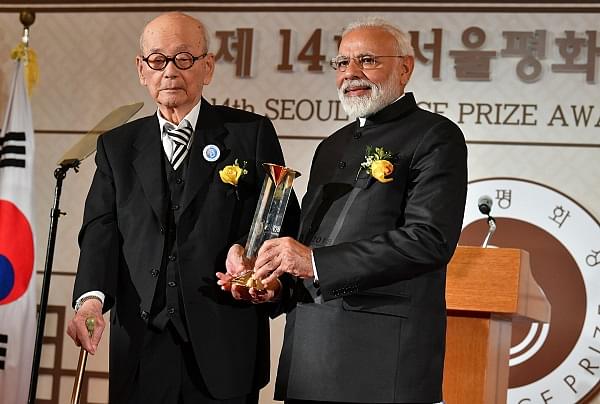 Prime Minister Narendra Modi was today (Friday, 22 February 2019) awarded the Seoul Peace Prize in Seoul, South Korea, reports Odisha TV. Crediting the people for the award, the prime minister said that he will be donating the money to the Namami Gange project for a clean Ganga.

Modi praised the strength of 1.3 billion Indians which has helped in him win the prize. He also dedicated the award to the Indian populace.

“It is for the culture that has given the message of peace even on the battlefield. In the Mahabharata, Lord Krishna preached the Bhagwad Gita during the battle,” he said, praising the ‘Vasudhaiv Kutumbkam’ (the world is a family) philosophy that had India had given to the world.

He remarked that the prize had been received by a country that wished for peace everywhere: in the sky, in the space and all across the planet.

Modi said that it was an honour to receive the prize in the year which will mark the 150th birth anniversary of Mahatma Gandhi.

He then spoke of his decision to donate the whole sum coming with the prize to the government’s Namami Gange scheme which aims to clean the holiest Hindu river. “I would like to contribute the monetary award of $200,000 i.e. Rs 1 crore 30 lakh to the Namami Gange fund for our efforts to clean river Ganga, which is not just the economic lifeline of millions of people but is also held sacred by us,” he stated.